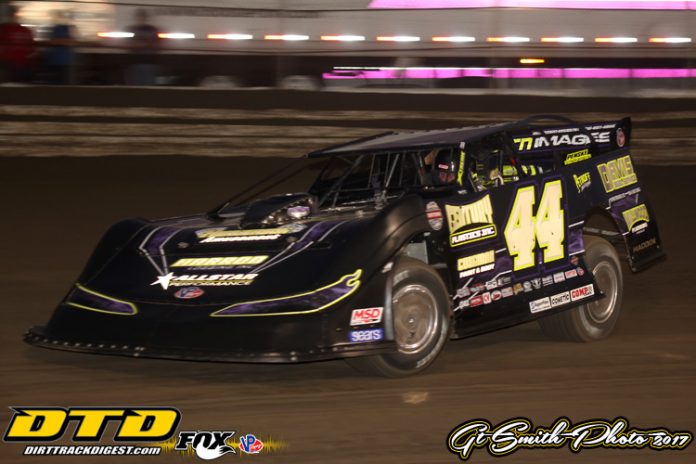 NEW RICHMOND, WI — Rain on Thursday forced the inevitable merge of two programs into one actioned-packed Friday night under the lights at Cedar Lake Speedway for the USA Nationals.

Chris Madden swept the World of Outlaws Craftsman® Late Model Series “matinee” event by turning the fastest lap on the track during qualifying, holding off charges from Scott Bloomquist during their heat race and defending the lead during the feature from Frank Heckenast Jr., Billy Moyer and Brandon Sheppard.

“This is one of biggest race we go to all year, I mean, it’s 50-grand,” said Madden.  “We’re excited to be up here and we’re happy to be back [at Cedar Lake]. We really like this place. Tonight, mother nature gave us a mud bowl but we’re looking forward to tomorrow.”

An afternoon shower on top of rain one day prior added to Friday night’s racing surface at the 3/8-mile but it didn’t hold the drivers back from being able to make passes. One incredible night of back-to-back Outlaw action to keep fans on the edge of their seats took place during the first night of USA Nationals.


In the first two laps of the 30-lap feature, Heckenast was able to find his way to second from a sixth-place start. From there he worked relentlessly to run down the pole-sitter, Madden. On lap 15, the No. 99jr was able to cut Madden’s lead down to only 0.198 seconds.

Unfortunately, on lap 17 all of Heckenast’s momentum was lost when a caution fell over the field for Tyler Erb who slowed on the front stretch. For the restart, Heckenast chose to the low line which placed Moyer on the high-side of the track and in position ride the cushion to pass; and that’s exactly what he did.

Moyer and Heckenast ran door-to-door battling for second all while trying to reel in Madden. On lap 21, current Series points leader, Brandon Sheppard appeared in the mix wanting a piece of the action as he found his way past Shane Clanton, Bloomquist and on the following lap, past Heckenast.

Sheppard used all three cautions to his advantage as he was able to work forward from a 10th place start to battle for third, then second, then duel Madden for the lead with three laps to go. On lap 28, the final yellow of the feature fell as Eckert slowed on the backstretch forcing a green-white-checker scenario.

Madden shot out of a cannon from the single file restart while Sheppard and Moyer’s battle for second ensued. As the pair came around turn four towards the white flag, Sheppard got too high and Moyer was able to slip under him overtaking second. He was able to hold onto the position for the final lap despite Sheppard’s best efforts.

“I just had to pack my line in on the caution and let ‘er eat,” said Sheppard. “That’s all that I could do. It was a little too treacherous up there and then we lost our brakes there toward the end. I don’t think we could’ve got around Chris up there… but you know from where we started and how we heat raced, I’ll take the third-place finish.”

“It’s a lot harder when you have to run all night,” said Moyer. “You just have to survive the thing and then get back and tune it some more.”

There was a mad dash in the World of Outlaws Craftsman Late Model Series pits following Thursday’s rescheduled program as drivers and crews were making adjustments their cars to take the track for hot laps, qualifying and heat races— some with more to fix than others.

“I had nothing to lose but with [preliminary for the] $50,000-to-win tonight, I tried to ease off a little bit there [in the feature],” said Heckenast. “We had a big night tonight leading up to tomorrow so you can’t really put it all on the line like you want to.”

The top two drivers from Friday evening’s four heats will head to the USA Nationals Dash on Saturday which will place them among the first eight positions in the crown jewel event later that evening. The dash will include Clanton, Heckenast, Jimmy Owens, Brian Shirley, Eric Wells, Mike Marlar, Kent Robinson, and Don O’Neal.

The 30th annual USA Nationals will kick off with racing at 7:00 P.M. Follow the World of Outlaws Craftsman Late Model Series on social media for live updates from all of our races: facebook.com/worldofoutlawslatemodelseries and twitter.com/WoOLateModels.