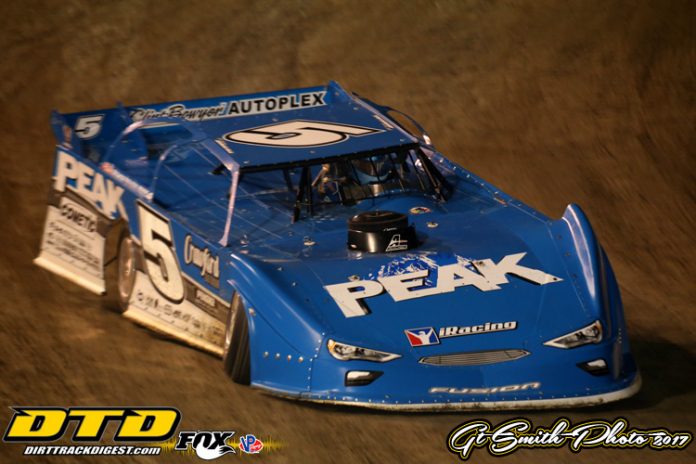 NEW RICHMOND, WI —  The 30th Annual USA Nationals presented the largest payout for a World of Outlaws Craftsman® Late Model Series event for the 2017 season. The crown jewel brought 42 Late Models to the Cedar Lake Speedway stage, all of whom were trying to claim a piece of a near $200,000 purse for the three-day show.

For the 100-lap finale, Don O’Neal worked his way from a fourth position start to claim the checkers on Saturday night. He pulled out of the 3/8-mile with the coveted eagle trophy and $50,000 richer.

“Man, I did [have to earn this one],” said O’Neal. “This place is so demanding. It starts off fast early and then it slicks off middle way through the race and then you have to finesse it. 100 laps are hard here… I’m just glad to get this Peak car in Victory Lane. It’s been a long time coming.”

O’Neal joined the Outlaws for every race of the Series Wisconsin swing. Of the four races, he landed on the podium three nights claiming a second at Oshkosh SpeedZone Raceway, a third at Shawano Speedway before wheeling his was to a win at Cedar Lake Speedway.


O’Neal led 47 laps of the 100-lap main event after passing pole-sitter Mike Marlar on lap 54. He then defended his lead from a four-car battle boiling behind him between Marlar, Jimmy Owens, Brian Shirley and Shannon Babb. Marlar was able to regain the lead for two additional laps before surrendering to O’Neal on lap 58 for good.

“It means a lot to get this win,” said O’Neal. “We have had good race cars here in the past but we haven’t been here in a couple of years. They decided to let us come again this year and hopefully we will be back next year. I’m just tickled to death. Hell yea!”

Despite his best efforts to reel back in the “Real Deal”, the Winfield, TN native settled for second by the time the checkers fell as he finished 1.691 seconds behind O’Neal.

“I’m blessed to be up here [in Victory Lane] and to be able to come up here [to Wisconsin],” said Marlar. “Man, we were close there but there was just a guy out there causing havoc. He messed me up bad… I had to slam on my breaks and that let Don get by me. Don really raced me hard there. It was a fun race.”

Bobby Pierce passed an impressive 13 cars to find his way to the podium from a 16th position start. Things began to click between Pierce and the Wisconsin oval late in the race but he made up the ground quickly. With 10 laps to go, Pierce sat seventh on the track but was able to weave through traffic to find his way to the front but unfortunately he ran out of laps to work on the race leaders O’Neal and Marlar.

“I fell way back on the start I think to like 20th and with about 75 to go I finally started picking off a guy about every five or 10 laps,” said Pierce. “With about 40 to go I think I just started coming on really strong. I didn’t even look up at the scoreboard until about 10 to… This thing was really digging there at the end. If it was a 120 lap race, I would’ve liked to see that outcome. I have a second here, and third here, and a fourth here. I just really want that win one of these days.”

After a busy five days, the World of Outlaws Craftsman Late Model Series has an off week to regroup and repair. The Series next event is on Aug. 17 at Georgetown Speedway in Georgetown, Delaware for the Fulton Bank 40.