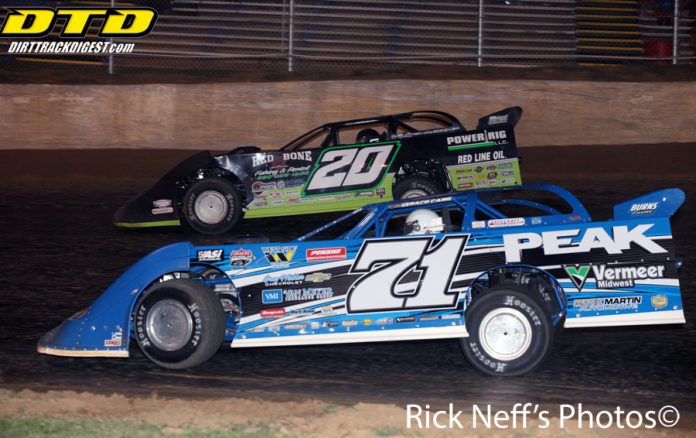 UNION, KY – Jimmy Owens survived a fierce battle with Darrell Lanigan to win the Sunoco Race Fuels North/South Shootout – presented by Lucas Oil on Thursday night at Florence Speedway. Owens and Lanigan swapped the lead several times before the halfway mark, with Owens gaining the lead for good on lap 16, though never comfortably ahead of the pack.

It was Owens’ third LOLMDS win of the season, but his first outside of his homestate of Tennessee where he had recorded wins earlier this season at Tazewell and Smoky Mountain.

The 3-time North/South 100 winner was elated in Lucas Oil Victory Lane. “It was a good show tonight. I was thankful to get the lead on the bottom when I did. The lapped traffic was a bear. I had a hard time getting around Scott [Bloomquist]. Wherever I went, he went, but that’s part of it. Maybe we can run good in the heat races tomorrow and get a good starting spot for Saturday.”

“I really felt like I needed to get off the top. I saw O’Neal up there and I figured he was running the cushion. I didn’t think I could catch the lapped cars on the bottom so that is why I stayed up top. I had to look over my shoulder there at the end to see who was there, especially on a track like tonight the guy running in second has the advantage. You never know where to be. Hats off to the track crew for a doing a great job on the track,” said the 3-time LOLMDS National Champion.


“I really wasn’t leaning on the cushion much. There is $50,000 on the line Saturday night so I wanted to keep it off of the wall. There was an awesome turnout tonight of drivers and fans. It’s great to have everybody come support us. This makes such a prestigious race even better.”

Lanigan debuted a new car and was in the hunt the entire 50-lap distance. “We struggled last week in Illinois and Wisconsin so we came home and built a new one. I love coming home and running here. The fans are great. Hopefully we can finally win this race. We have tried for a long-time to win the North/South 100. We have run second 3 or 4 times. So hopefully we can bring this I-Racing.com entry home with the win for Clint Bowyer and all the guys.”

McCreadie had a great points night with his third-place finish. “It was definitely top-dominated. Jimmy did a good job there and I thought well maybe we could get around him, but Darrell was there and we all had a heck of a race going. I am happy with a third-place. I think we can get some more out of it.”