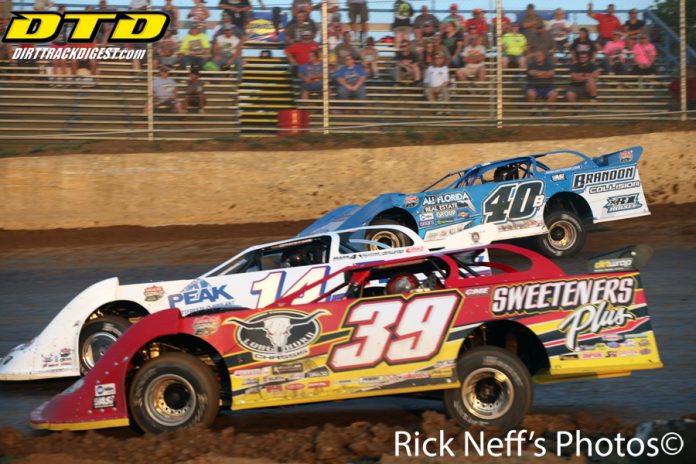 In the first heat of the night Carrier, the 2014 winner of the North/South 100, led all the way to take the victory in the Keaton’s Collision Center, Longhorn Chassis. Victor Lee finished in second, with Dale McDowell crossing the line in third.


The fourth heat of round one saw current LOLMDS points leader, Josh Richards’ Best Performance, Rocket score an easy win. Former LOLMDS Rookie of the Year, Billy Moyer Jr. took the second spot. R.J. Conley came from the eighth starting position as he used the top line of the track to take the third finishing spot.

The fifth heat saw defending North/South 100 winner, Bobby Pierce come from the fifth starting position to take the win. Kyle Bronson held the lead for most of the race until Pierce stormed by him. Darrell Lanigan came from seventh to finish in third.

The sixth and final heat of round one saw Don O’Neal, a two-time North/South 100 winner take an early lead in the Clint Bowyer, Peak Antifreeze and Coolant, Club 29 entry. O’Neal never looked back in claiming the win over fellow Hoosier-state driver Kent Robinson. Steve Francis, who was involved in an early race incident and had to restart on the tail, charged through the field, and rallied to finish third.

In the second heat of round number two, Shanon Buckingham survived a torrid battle with Scott James to take the win. The driver of the Double Down Motorsports, Tennessee RV Supercenter, Longhorn withstood several challenges from James to get the win. Trailing Buckingham and James to the finish line was Jason Miller.

The third heat saw Tim McCreadie in the Sweeteners Plus, Longhorn lead all the way by dominating the entire race. Scott Bloomquist came from the outside of row number five to finish second, and Adam Bowman came home in third.

The fourth heat saw a great race between Mike Marlar and Michael Chilton. The two drivers swapped the lead back-and-forth with Marlar coming out the winner in the Ronnie Delk-owned, Delk Equipment Sales, Rocket. Chilton was second with Steve Casebolt trailing in third.

The fifth heat was taken by four-time LOLMDS National Champion, Earl Pearson Jr. as he sprinted away from the pack to score the win in the Dunn-Benson Ford, Lucas Oil, Longhorn. Hudson O’Neal grabbed the second spot at the finish line over Chris Ferguson who was third.

The sixth and final heat of round two was an excellent battle between Brandon Overton and Gregg Satterlee. Satterlee led most of the way until Overton overtook him in the waning laps for the win in the Chip Stone and Randy Weaver-owned, Mission Transport, Longhorn. Satterlee was second with Devin Moran rounding out the top-three.