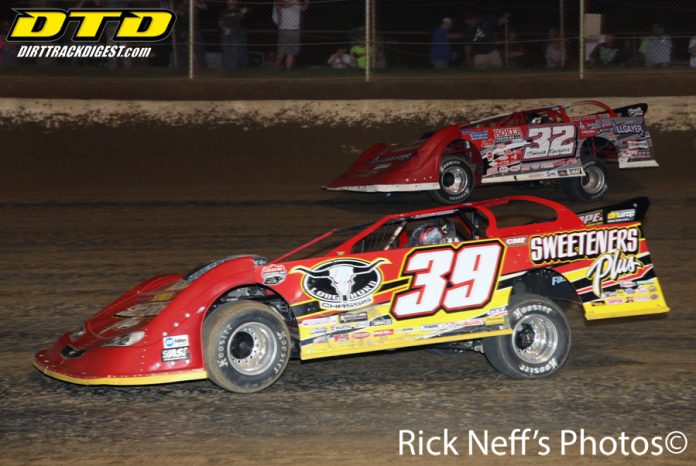 UNION, KY – Tim McCreadie passed race-leader, Scott Bloomquist on lap 97 and then held off Bobby Pierce and Bloomquist to win the 35th Annual Sunoco Race Fuels North/South 100 – presented by Lucas Oil on Saturday night at the Florence Speedway. Bloomquist had been the dominant car for most of the race until McCreadie and Pierce went to the outside of the track – both forging ahead of Bloomquist with three laps remaining.

McCreadie earned $50,000 in his first-ever win at the King Family promoted facility. Pierce; last year’s winner; came home in second with Bloomquist; a 2-time winner of the race; finishing in third. Jimmy Owens led the first 17 laps, but finished in fourth. Darrell Lanigan was fifth at the checkered flag.

With a standing-room only crowd on hand for the event; McCreadie did his patented victory lane celebration that had the crowd cheering ever louder. “I think we all have learned a lot from Bobby [Pierce] – if there is something out there you need to run it. Bobby and I probably raced a bit too clean; we had an issue at the Show-Me. I appreciate that he ran me clean. He [Pierce] is turning into a true professional. He could have raced me dirty, but he didn’t.”

“Thanks to Sweeteners Plus and Longhorn Chassis this makes perfect sense. Never in my wildest dreams did I think it would turn out like this. Thanks to everybody at the shop, also a big thanks to Pro Power Racing Engines and Penske Racing Shocks. I was a little free early on, but as the track burned off we got better. I was tighter through the center than I would have liked. I am bullheaded sometimes, but I put my faith in my guys tonight and it paid off.”


“Congrats to McCreadie on the win. That is what you call racing,” said Pierce. “A few months ago at the Show-Me I I kind of rubbed him a little bit. He wasn’t happy about that. Tonight we were duking it out and we kind of came up through the field like teammates there, it’s like we were drafting of each other. Last year there was a lot of cushion to use as compared to this year, so it made it a little tougher.”

Bloomquist; who was looking for his first North/South 100 win since 2000 and was coming off three-straight years of runner-up finishes; looked to be headed to his third win in the event until McCreadie and Pierce caught him. “We didn’t realize they were that high and I didn’t think there much up there to work with. I didn’t really get a signal to where they were at on the track. I had no way of knowing. We kind of stayed right in the middle and was pacing ourselves.”