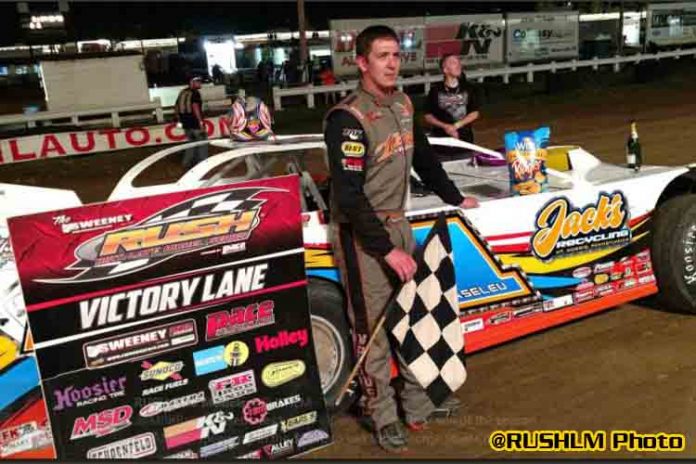 IMPERIAL, PA – The Sweeney Chevrolet Buick GMC RUSH Dirt Late Model Touring Series powered by Pace Performance sanctioned the 28th annual “Jook George Steel City Classic” on Saturday night at Pittsburgh’s Pennsylvania Motor Speedway. Race #10 of the 2017 season brought out a season high 43 cars from all over Pennsylvania, Ohio, West Virginia, New York, and Michigan to “Dirt’s Monster Half-Mile”. Approximately $22,000 cash plus contingencies were paid out for the season’s richest event as a special thanks goes out to event organizer Branden Lockwich, who secured funds from many contributors to make the event what it was.

Mike Pegher, Jr. ended a near 15-month winless drought on the Sweeney Touring Series by beating out point leader Bryce Davis for the $4,010 victory to become the season’s seventh different winner in 10 races. In doing so, Pegher became the first four-time winner of the “Jook George Steel City Classic”. Pegher just missed out on a perfect night due to a runner-up in the K&N Dash as he set fast time, won his heat race, and the 40-lap feature bringing his night’s total to $4,235 plus contingencies including the Maxima Racing Oil “Maximum Performance” winner.

“We’ve had a pretty good car all year long but have had a lot of seconds and a couple thirds,” explained the 31-year-old Cranberry Township, Pa. driver. “Without these guys behind me, Brian (Swank) and Jerry (Haseleu) this wouldn’t be possible. They give me a great opportunity to drive this car- it’s top notch equipment. We have a blast doing it so hopefully it keeps going. To come down here and win this Jook George race again means a lot to a guy like me. Not only is the money good, but it’ll always be in the record books that I have four of them. Four thousand dollars is a lot at $160 per tire!”

After K&N Dash winner, Russell King, was docked a row for jumping the initial start, Jacob Hawkins soared to the early lead over Pegher, Davis, King, and John Waters. Hawkins and Pegher began to distance themselves from the field, while the battle was on for third between Davis and King on lap seven. As the laps ticked off caution-free, Hawkins had a quarter of a straightaway lead built by the time he caught lapped traffic on lap nine; meanwhile, King was all over Davis and finally made the pass with an inside move in turn four on lap 11.


King was clearly on the move as he ran down Pegher on lap 13 and pulled even in the battle for second on laps 14 and 15 before making the pass on the inside of turns one and two on lap 16. King had a half-straightaway deficit to make up on Hawkins. The race then took a dramatic turn on lap 18 when Jamie Wrightsman hit the wall in turn two and came down across the track; Hawkins had nowhere to go as he drilled Wrightsman. King then couldn’t quite avoid the accident as made hard contact. Though King never stopped, he suffered two flat tire tires and suspension damage, which ended his night and a shot at his third Tour win of the season. Hawkins was given the TBM Brakes “Tough Brake of the Night”.

After going 17 laps without a caution, that accident was the first of four stoppages over the next 10 laps. The restarts proved interesting especially from third on back as the positions swapped continuously. John Mollick, Waters, Justin Lamb, and Colton Flinner at one time all occupied the position before Lamb secured it for good on lap 27, while Flinner suffered a flat tire in the second Bill Kessler #09 entry.

Following the final caution for Flinner with 27 laps secured, Davis finally made the outside work as he led lap 28; however, missed his entry on lap 29 and pushed as Pegher drove back under for the lead. It was a lead that Pegher wouldn’t relinquish as he pulled away each lap as the race went clean and green to the finish with Pegher winning by 2.379 seconds in the Brian Swank-owned, Royal Flush Oil & Gas/Mike’s Classic Car Wash/Jack’s Recycling-sponsored #RJ1. The victory was Pegher’s seventh of his career in the Sweeney Tour, but first since May 20, 2016 at Wayne County Speedway.

“I honestly thought I was done,” revealed Pegher describing the accident that took out Hawkins and King. “They called the caution and I seen Jamie (Wrightsman) up there spun out. Unfortunately Jacob had absolutely nowhere to go. I think he might have been a little better than us, but we were catching him in lapped traffic. It would have been nice to see how things would have played out. We struggled all night long on restarts. It just didn’t want to go. It didn’t matter if I went fast or slow. Bryce (Davis) did a good job on that one restart and I thought I gave the race away, but he got tight down there I think and I was able to drive below him.”

Davis earned $2,000 for his runner-up finish as he continues to lead the points. Davis was running second on lap 20 and received an additional $100 from Falconi Family of Dealerships/race team 93x. “The car was very good,” stated the 26-year-old Hornell, NY driver. “I thought we had a shot at him (Pegher), but he ran a great race. Congratulations to him and his team. We’re happy with second place tonight. I just scathed through that accident. I saw Hawkins get into him and King was right in front of me. I checked up and squeezed through there and got pretty lucky. Pegher was a little better than us on the longer run. I had the lead on that one restart, but I think I missed my spot getting into (turn) one. I slid up, lost the traction, he got back by, and it was over. We came down here, made a little money, and extended our point lead.”

Lamb turned in his career best Sweeney Tour finish with his first ever top five in third. Lamb charged from the 13th starting spot doing it on the $135 sealed, spec Bilstein Shocks to earn $1,200. “We finished second in this race last year to Mike (Reft),” said the 35-year-old Coraopolis, Pa. racer. “I have to really thank Branden (Lockwich), the Mileys, and RUSH for putting this show on and raising all this money. We kind of qualified bad in the middle of the pack, but chipped away at it all night. I didn’t have anything for those guys. I think that’s as far forward as I was going to come from 13th, but I’m happy with third against those two. I have to thank Bilstein for the shocks. They are $135 a piece and I can’t say enough about them. It’s incredible they are able to run with $800-900 shocks. It’s a shame they can’t be mandatory, but we’re working on a deal to continue running them next year. My goal was to finish in the top five at a Tour race. We’ve been close a couple times so to finish third in a big Tour race like this is great.”

Second and third place Tour point men, Waters and Wonderling, finished fourth and fifth and earned $1,050 and $1,000 respectively. It was a great run for Wonderling in his Pittsburgh debut coming from 17th to earn the $100 Precise Racing Products “Pedal Down” Hard Charger gift card along with $100 cash from Alternative Power Sources.

Ben Policz went from 14th to finish sixth in his first Tour start of the season. Mollick dropped to seventh. Dan Angelicchio made his first Sweeney Tour start since October 12, 2013 at Pittsburgh, and finished eighth after starting 19th. Track regulars Michael Reft, who won last year’s event, and Daryl Charlier were ninth and 10th.

Steve Beatty was the final car on the lead lap in 14th and received a $25 CrateInsider.com certificate. Russ Matejka picked up the unpublicized $500 bonus for being the last running car on the track courtesy of Ron Hall and Colton Flinner Racing. Andrew Wylie dropped from the event on lap 12, but not before receiving $110.10 for running 10th on lap 10 from Derek Charlier Productions.

Chuck Medved ended the night capturing his first career checkered flag by winning the 10-lap non-qualifier event. The 44-year-old driver of nearby Imperial, Pa. took the lead at the start and checked out winning the non-stop race by 3.022 seconds utilizing the $135 sealed, spec Bilstein Shocks. Medved became the 25th different winner in 28 non-qualifier events run all-time and earned $175 in his Garden of Eating/Dean’s Water Service/Benzy’s Performance Diesel-sponsored #2M. Zach Kane trailed in second for the duration in his 2017 Tour debut. After a 360-spin by Colby Beighey, Chuck Recker, seventh starting Tony White, and Bob Schwartzmiller moved up to finish third through fifth. White, a two-time champion of the “Wheelman” Bonus Event Challenge Series, now takes over the point lead.

Pegher set fast time in $100 FK Rod Ends “Shock the Qualifying” with a lap 19.797 and also earned an additional $100 from Robin’s Dog House. Pegher, King, Hawkins, and Mollick added $25 for winning the FK Rod Ends heat races. Eric Wilson and Matt Latta won the twin last chance B mains. King won a $100 K&N certificate for his second “Cold Air Induction” Dash win of the season. Pegher received a $50 K&N certificate for second, while Hawkins and Davis earned $25 cash for third and fourth. Will Thomas III made his first ever start in the Bob Williams #8 subbing for Alan Dellinger and was the first driver to fail to qualifier for the feature and received the ARbodies nose kit.

“On behalf of the (Jook) George Family and myself, we want to thank the drivers who came to support the event,” expressed event organizer Branden Lockwich. “To have 43 cars exceeded our expectations. Thank you to the RUSH Series and officials who were there and all the fans who turned out to honor Jook and family. Along with all of the contributors, I want to thank Jim Bloom for the victory lane check and Ricky Byers of Awesome Signs for the fast time and dash checks.”

The Sweeney Tour will be in action twice this coming week with the annual McKean County Fair race on Thursday (August 17) in East Smethport, Pa. for a $1,500 to-win “Platinum” Event then on Sunday (August 20) at Tri-City Raceway Park in Franklin, Pa. for the $2,000 to-win “Manufacturers Night” presented by MSD Performance. Race time is 7:30 p.m. on Thursday and 6 p.m. on Sunday. The Tri-City event has a rain date of August 27.