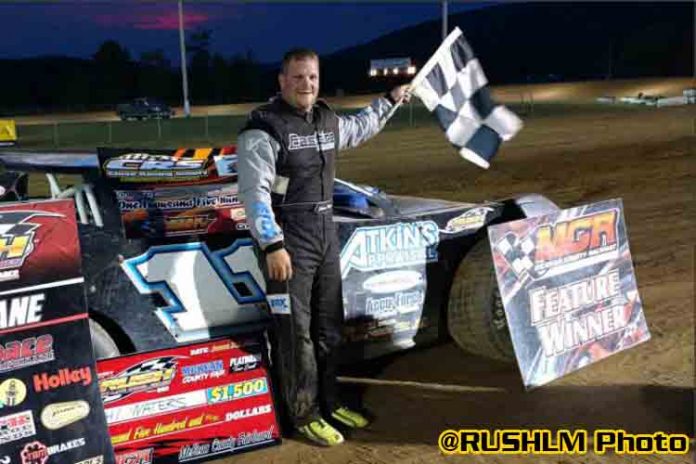 SMETHPORT, PA – After the wildly successful “Jook George Steel City Classic” on Saturday at Pittsburgh’s PA Motor Speedway, the Sweeney Chevrolet Buick GMC RUSH Dirt Late Model Touring Series powered by Pace Performance was right back in action on Thursday night at McKean County Raceway for the first of two appearances during the 2017 season. Despite a bleak forecast of 80% chance of rain, drivers from Pennsylvania, New York, Ohio, and West Virginia were on hand, and the races were moved along quickly just beating the fast closing storm system with the feature in the record books by 8:30 p.m. The event was race night number two as part of the 112th annual McKean County Fair.

After an early heat race tangle, John Waters made his way through the field to make the feature redraw. Waters then drew the pole position and went out and dominated the 25-lap feature earning his second win of the season and eighth consecutive top five finish! The defending Series champion closed the gap to just four points on point leader Bryce Davis, who dropped out of the event. Waters, who was chosen as the Maxima Racing Oil “Maximum Performance” award winner, becomes the sixth different winner in six McKean County Fair events run.

“I have to thank the guys we’ve been working on this all week to get it back up to par,” explained the 36-year-old Whitesville, NY victor. “We spent the extra time on it and it really worked out. I have to thank Cale Schwartzmiller. He drew me the number one pill and that was the deciding factor tonight with a stout field like this on a hammer down track. It was pretty decent, had some characteristics to it; you had to race it. I saw (Mike) Pegher got up to second on the scoreboard. I just had to hit my marks, hold my line, and if he passed me he passed me. I kind of laid off the last five laps knowing it was only 25 laps tonight so I didn’t catch that lapped traffic. I figured if I saw Mike’s nose underneath me I’d pick it up. I’d like to thank the fans for coming out and supporting the track and fair, and (Chris) Zuver for keeping plugging along here.”

Waters took off on the start with Jason Knowles, Wyatt Scott, and Mike Pegher, Jr. moving past Brian Swank for positions two through five on the opening lap. Pegher put the heat on Scott on lap two and by lap four the two closed in on Knowles making it a three-car race for second as Waters pulled away. Bill Kessler spun to bring out the first caution with six laps completed, and on the ensuing restart a three-car accident occurred on the backstretch involving Mike Wonderling, Jr., Brad Mesler, and Brian Knowles.


Back under green flag racing, Pegher again put the heat on Scott in the battle for third as the duo raced side-by-side for five laps between laps 10-14 before Pegher finally made the pass stick in turn four before a caution for rookie Kyle Murray. Following the event’s final caution for a spin by Paul Norman with 15 laps completed, Pegher moved past Knowles for second. Davis had worked his way from ninth to fifth before dropping out on lap 22.

Fresh off his first Sweeney Tour win in nearly 15 months last Saturday at Pittsburgh, Pegher garnered his fourth runner-up finish of the season and seventh podium in just eight starts! “Hats off to John (Waters), but unfortunately my crew guy pulled him a number one pill,” joked the 31-year-old Cranberry Township, Pa. runner-up finisher. “I wish it would have been for me, but he was good. Even when we got to second, I don’t think we had anything for him. Overall with a bad pill draw at the beginning of the night, we’ll take a second. I have to thank the owners Brian (Swank) and Jerry (Haseleu), my sponsors, and everyone that comes to help us to make this thing go together. It was also impressive what Brian did racing here tonight. This was probably the fastest track he’s ever been on for traction.”

Knowles’ third place matched his best Sweeney Tour finish since July 1, 2016 at Lernerville Speedway as he overtook his brother Brian for fourth place in points. “I was just telling him (Pegher) on that last restart I kind of peeked to the inside and I saw white and I just couldn’t chop him off,” described the 35-year-old Addison, NY third place finisher. “We’ve had a real bad middle of the summer so I figured third is better than nothing. I didn’t want to crash everyone and myself. I’ve done enough of that this year. We’ve either been caught up in stuff not of our doing or equipment failures. To finish third tonight hopefully we can really turn things around the rest of the summer and fall. My crew really busts their butts out there. If it wasn’t for my wife I couldn’t do this. She’s out in the garage and helping even more than I do I think sometimes. She’s the real backbone of what we do. I have to thank my dad. He got us into this. Also have to thank all of my sponsors and everyone that helps out.”

Scott held off his good friend Eric Wilson for fourth to garner his best career Sweeney Tour finish in his fourth season of racing for the 2016 “Futures Cup” Champion. Wilson had a good run after starting 12th to finish fifth and earned the $100 Precise Racing Products “Pedal Down” Hard Charger gift card.

Swank dropped to sixth, but the 51-year-old Morgantown, West Virginia second-year racer was able to record his best career Sweeney Tour finish beating his first top 10 in eighth last month at Expo Speedway. Andy Michael, Steve LeBarron, Murray, and 17th starting R.J. Pistner were seventh through 10th. Bill Kessler was the final car on the lead lap in 13th and received a $25 CrateInsider.com gift certificate. Touring Series regular, Tony White, blew an engine and was given the TBM Brakes “Tough Brake of the Night”.

Heat winners were Davis, Michael, and Jason Knowles. Brian Knowles won his first K&N “Cold Air Induction” Dash of the season for a $100 K&N certificate. Murray was second for a $50 K&N certificate, while Wilson added $25 cash for finishing third.

The Sweeney Tour will be right back in action this Sunday (August 20) at Tri-City Raceway Park in Franklin, Pa. for the $2,000 to-win “Manufacturers Night” presented by MSD Performance with over $36,000 in product giveaways. Race time is 6 p.m. The event has a rain date of September 2.