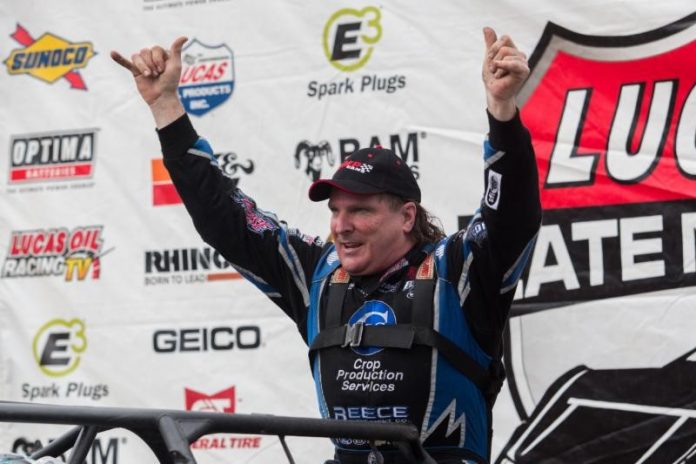 Bloomquist inherited the lead on lap-66 when race leader, Austin Rettig had to pit for a flat tire. Bloomquist then led the remaining laps to score the $40,000 victory in the Lucas Oil Late Model Dirt Series and COMP Cams Super Dirt Series-sanctioned event.

Tim McCreadie led the first 63 laps of the race until Rettig rolled around him to take the lead. Rettig led two laps until a caution came out. Under the caution, Rettig’s right-rear tire went flat, relinquishing the lead to Bloomquist.

Bloomquist entered the weekend tied with Billy Moyer – each having four career wins in the crown-jewel event’s history. He led the remaining 34 laps unchallenged to get the victory. “The car was awesome. Once we moved outside, I got by a bunch of cars. I had to take it easy on the tires. We were looking for somewhere around lap-40 to pit and it worked out for us,” said Bloomquist, who started the race in the 23rd position.

“I just kept watching those lead cars. They were starting to have trouble around lap-60. I knew we had enough for them at the end. I just had to keep the car straight and smooth. The Andy Durham Racing Engine ran great. I can’t thank everyone enough, especially all my help, the sponsors, and all the fans. I followed the 94 car [Rettig] through there, but he was burning the tires up. I would sweep wide on the straight-aways and go low in the corners. That was the fastest groove. I wasn’t worried about being passed at the end. I was just worried about tire wear to finish the race. I didn’t push it nearly as much as I could have there at the end.”

Satterlee took the second spot after having to survive a pit stop as well. “We had a really good car. To get a top five here, we are happy with that. We have been struggling lately, but made some good decisions on the car. We were tight after hot laps, and we wanted the car to drive as freely as possible, to save the tires. I could make the middle of the race track work, and we got all the way to second, but Scott was good. I thought I could roll him on the outside. There was a fine line out there. Congrats to him [Bloomquist] on the win. The Rocket Chassis was really good today and the Andy Durham Racing Engine ran flawless.”

Erb surged into the top three when several of the frontrunners began having tire issues.

“We had a good car today. A lot of guys had troubles today. We had planned to pit there sometime early if there was a caution the way the track looked. We needed to have some fresh tires to get to the second half of the race. I want to thank Black Diamond Chassis, Ideal Ready Mix, M&S Concrete, McBride Mack, and Vomac Truck Sales. I want to give a shout out to my main sponsor, Johnny McBride, today is his birthday.”