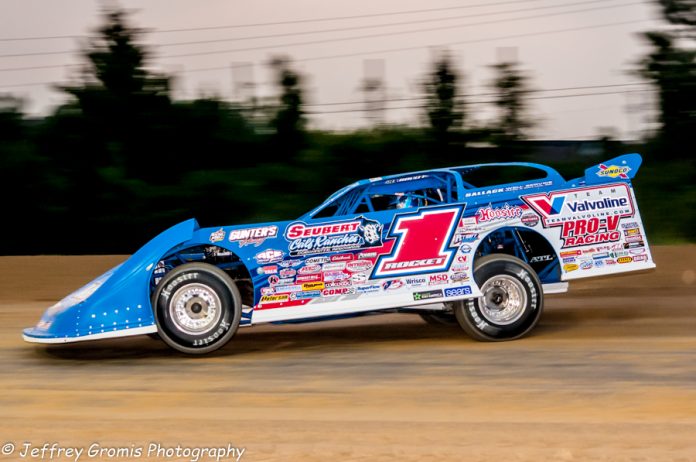 ERIE, PA – Brandon Sheppard conquered his 14th World of Outlaws Craftsman® Late Model Series win of the season and his second win in a row in the state of Pennsylvania on Sunday night at Eriez Speedway. While it is no surprise to see Rocket Chassis house car in Victory Lane, the shootout was anything but predictable as three different drivers commanded the lead throughout the 50-lap event including Russ King, Jared Miley and eventual winner, Sheppard.

“We have had a really great car all weekend we just haven’t had luck on our side and tonight the luck was on our side,” said Sheppard.

It was undeniable that luck was on Sheppard’s side especially in the final laps of the 50-lap feature. Unfortunately for fellow Rocket Chassis XR1 driver Miley, his luck was drained and the glimmer of winning his first Outlaw race was wiped clean on lap 48.

Miley had commanded the lead on lap 36 from race long leader King. Shortly after, Sheppard, who had found his way in and out of the battle for the lead position several times throughout the 50-laps, had found his way past King and back to Miley’s bumper. The pair ran door-to-door around the 3/8-mile dirt oval for several laps.

With six laps to go, Sheppard tucked his nose under Miley’s deck trying every which way to make the pass. On lap 46, Sheppard claimed the lead but the No. H1 regained control one lap later. Miley then charged into turn three with two laps remaining trying to escape the grasps of the Rocket1 driver. As he powered through the turn, he spun around to a stop and surrendered the lead to Sheppard on lap 48. A heart-broken Miley drove straight to the pits never to return to the track.


“I don’t know if we could have gotten by Jared [Miley] if he didn’t mess up there,” said Sheppard.

Mark Richards, Rocket Chassis President, agreed with his driver, “Tonight, that was very unfortunate for Jared. He had a really good run going and I’m pretty sure he might have beat us tonight. He got into a lapped car there and I’m not exactly sure what happened but it turned out lucky for us.”

King, who had led 35 laps of the 50-lap event settled for a second-place finish which is his only top-five of four entries with the Outlaws this season.

“I caught lapped traffic, went the wrong way a couple of times, got my tires hot and I felt myself giving up from there,” said King. “That’s what separates these guys who do this all of the time. They can keep themselves under control and not make mistakes… We’re getting close here. It took me like 10 years to get here so maybe in another 10 years we’ll win one.”

Wells rounded out the podium with a third place finish from a seventh position start. The No. 18 rebounded from the night before at Port Royal Speedway where he experienced issues with his motor after hot laps. The Wells Motorsports team worked tirelessly throughout Saturday night and Sunday morning to get his Longhorn Chassis on the podium.

“I thought we were going to finish this race without breaking anything but we lost brakes about half way through the race so maybe I am better without brakes,” said Wells. “The car was really good. I could run that bottom pretty early but when I lost brakes I had to move up because the hole in [turn] one was messing me up. We are just glad to get a good finish at the end of this swing here.”

The next stop for the World of Outlaws Craftsman Late Model Series is on Aug. 26-27 for the Keyser Manufacturing Great Lakes Shootout at Merritt Speedway. For more information on our upcoming event in Lake City, Michigan click here.

For complete results from the World of Outlaws Craftsman Late Model Series event at Eriez Speedway visit the results page.