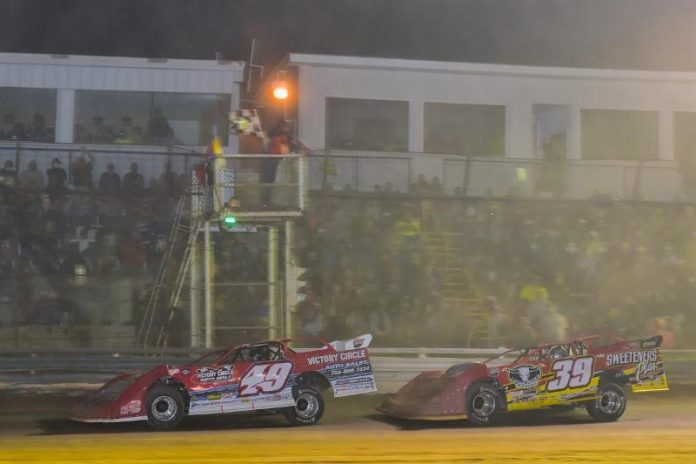 MIDDLEBOURNE, WV – Jonathan Davenport held off Tim McCreadie at the finish line to win the 49th Annual Hillbilly Hundred on Sunday night at the Tyler County Speedway. Davenport took the lead from race-long leader, Jimmy Owens on lap 83 and then held off a hard-charging McCreadie to claim his first-career win in the historic event. After starting 17th, McCreadie went to the outside of Davenport coming off turn four, but Davenport held him off by one-car length to secure the $25,000 victory.

“I passed for second like three times there then there would be another caution. I want to apologize to Jimmy Owens, I went in hot and locked up the brakes. I want to first thank G.R. Smith, for someone to step out of their own car and to let someone else drive it, says a lot about him. I have to thank Josh Richards, he helped me out before the start of the race. The right rear shock wasn’t where I wanted it to be and he tuned on it. ”

“These Rocket cars are great. I thought I had this win last year. I really like this place,” said the 33-year-old racer in Lucas Oil Victory Lane for the first time this season. The winners Rocket Chassis car is powered by a Cornett Racing Engine and sponsored by: Victory Circle Auto Sales, B&A Pallet, Victory Circle Auto Mall, FK Rod Ends, Behrent’s, and Northern Lights Windows and Door.

McCreadie started alongside Scott Bloomquist in row nine and charged through the field to take the runner-up spot at the finish. “It was so tough to come up through there in this field of cars. It was just a little narrow out there tonight. The outside restarts were good. Yes, we are happy with this finish,” said the driver of the Sweeteners Plus, Longhorn entry.


Owens was in control of the race until he relinquished the lead to Davenport. “We had a really good car tonight. There were a lot of restarts. I don’t know how that played into the end. But we were slipping up. We moved down there and it seemed to help,” said Owens about his podium finish.