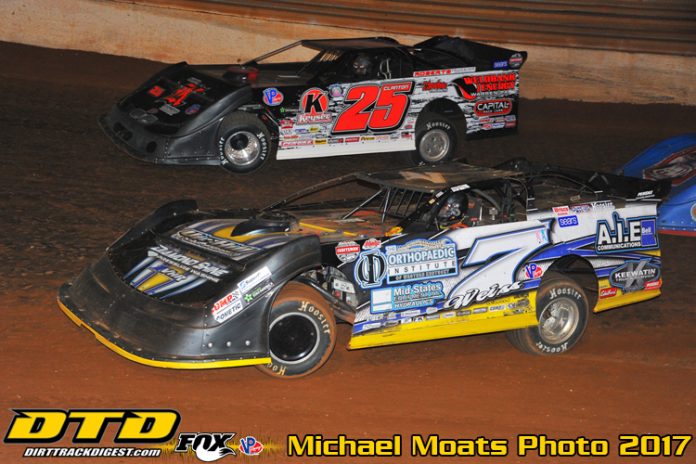 CONCORD, NC – The World of Outlaws Craftsman® Late Model Series makes its return to Kansas for the first time in a decade on Friday, Sept. 22 when the Outlaws invade Lakeside Speedway.

Although the Series visited another Kansas track in 2008, the last stop at the 4/10 semi-banked oval in Kansas City was on June 16, 2007. Series veteran Shane Clanton grabbed his first win of the 2007 season at Lakeside Speedway after a short challenge from Brian Shirley. Luckily for Clanton, Shirley surrendered to mechanical trouble with five laps remaining, and the Georgia Bulldog rallied to Victory Lane, claiming the $10,000 check at the end of the co-sanctioned World of Outlaws/MARS DIRTcar Series Kansas City 50.

“After [Shirley passed me], I was just thinking, ‘Hey, second is pretty good,'” said Clanton after his win in 2007. “Any top five you get against this tough competition is good.”

Since then, Clanton has gone on to win the World of Outlaws Craftsman Late Model Series 2015 championship and currently sits fourth on the all-time wins list with 42 career wins – only two wins behind Billy Moyer in third. Clanton’s most recent win was at Merritt Speedway on Aug. 26 after making a last-lap pass by race long leader Chris Madden.

Following Lakeside Speedway, the Series will swing into Oklahoma for the first time since 2005 with their first-ever visit to “the fastest speedway in all of Oklahoma”, Salina Highbanks Speedway on Saturday, Sept. 23.


Finally, the Outlaws will head back into Kansas one last time this season for their first-ever appearance at 81 Speedway on Sunday, Sept. 24.

While this is the Outlaws’ first time at 81 Speedway, Tyler Erb, of New Waverly, Texas, looks forward to his return to the 3/8-mile clay oval. Erb’s last appearance on the Kansas track was in 2013 for a MARS sanctioned race. At the time Erb was 16 years old with only a year and a half of experience driving a Late Model. He finished an impressive seventh in the show.

“I’m just glad the month of August is over at this point,” said Erb. “I’ve been terrible lately. I’d be happy to go anywhere and just start fresh. Hopefully the month of September will be my month.”

All 10 full-time World of Outlaws Craftsman Late Model Series drivers and the competition that awaits them will be looking to claim a chunk of the $120,000 total purse money handed out that weekend; Lakeside Speedway and Salina will both host 50-lap, $10,000-to-win shows, while 81 Speedway will be 40 laps and $8,000-to-win. For the full-time drivers, three separate shows also mean a chance to boost their position in the points race that is quickly boiling down as the season comes to a close on Nov. 2-4 at the Dirt Track at Charlotte Motor Speedway.