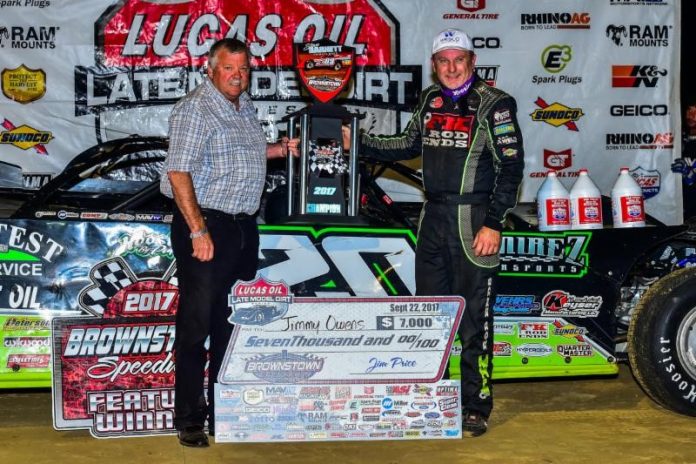 BROWNSTOWN, IN – Jimmy Owens led all the way to score the win in the Tribute to Stave Barnett race at Brownstown Speedway. The three-time series champion bolted to the lead at the start of the 30-lap Lucas Oil Late Model Dirt Series feature on Friday night at the Brownstown, and was never seriously challenged throughout the race. It was his fourth LOLMDS win of the season and his third career win at Brownstown.

Devin Gilpin picked up the second spot from pole-sitter, Tanner English on lap four and stayed there the rest of the race to register his best career LOLMDS finish. Gilpin pulled to within two-car lengths at times, and appeared primed to catch Owens as they battled heavy traffic, but was never able to make a move. Trailing Owens and Gilpin to the finish line were Tim McCreadie, Josh Richards, and Darrell Lanigan.

“I can’t thank my crew enough,” said Owens in Lucas Oil Victory Lane, “The car was good all night. Our car was very maneuverable and we could run anywhere on the track. It [the track] was in really good shape tonight. Thanks to the track crew for helping us put on a good show for the fans tonight.”

Owens only experienced a few hiccups during the race as he was three-wide in lapped traffic for several laps before clearing those drivers and expanding his lead over Gilpin. It was Owens’ 58th career series win, which keeps him second all-time to Scott Bloomquist.

“I can’t believe I am up here on the podium with Jimmy Owens and Tim McCreadie. Jimmy Owens is one of my racing idols. We tried our best tonight to run him down. To comeback from the accident here last month, to get a win last week, and a second tonight against the best in the country, is just awesome. I want to thank Jim Beeman for giving me another chance to drive his car. We learned a lot tonight for tomorrow night’s 100-lap race.”

McCreadie closed the gap on current championship point leader, Josh Richards, who finished one spot behind him in fourth. “The race track was just awesome tonight. Hats off to the track crew. It just shows that you don’t need a rough track with a big cushion to put on a show. There was a big crowd here tonight and I am sure tomorrow night, the place will be packed.” 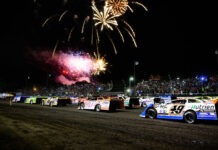