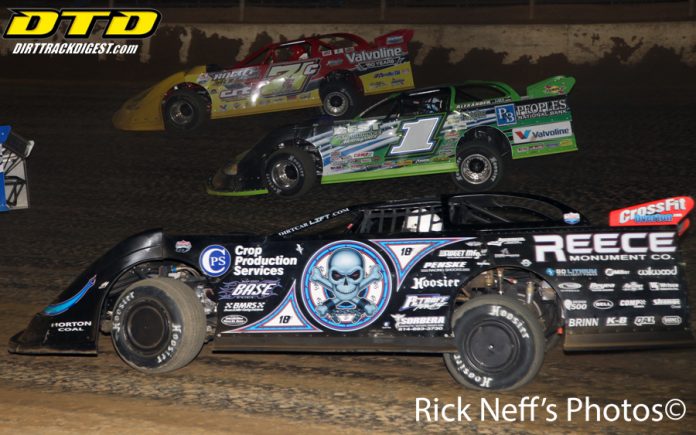 BROWNSTOWN, IN – When Scott Bloomquist entered his first race at Brownstown Speedway in the late 1980’s, he took an immediate liking to the quarter-mile oval. Saturday night, for the thirteenth time in his career he went to Victory Lane at the Southern Indiana venue, capturing a record-extending seventh Jackson 100 event.

Jason Jameson made a late-race charge to close the gap on Bloomquist, but could never get close enough to challenge for the win in the final laps. Hudson O’Neal; the leading rookie driver on the LOLMDS tour; started on the outside of the front row and finished in third. Completing the top five were Jimmy Owens and Gregg Satterlee.

“I don’t know why they boo me so much here, I guess it’s because they have had so many good drivers from this area. I must give it up for Hudson [O’Neal], he has really impressed me this year. What can you say about Don [O’Neal], he has always been a great competitor and he has been racing a long time. They have had a lot of good cars from this area as well. We respect everybody out here.”

“After the track crew went out and re-worked the track, I wasn’t worried about changing anything. We never considered it. The track had more traction than I thought it would. We bottomed out a few times during the race. The car was perfect and I could keep turning it and throttling it through the corners. There was plenty room to pass. You don’t have eyes in the back of your head, so you just try to do the best you can.”

Jameson put himself in contention to try and steal the win away from Bloomquist but was unable to get to within striking distance. “I want to thank the fans for coming out. I hope they enjoyed the races this weekend. I want to thank James Rattliff for giving me a chance to drive his car. Thanks to Jeff Gullett and Tim Tungate and everybody else on the crew for their help. “


“He [Bloomquist] was so good on the bottom. When I got to second, I thought I had a shot at him. If we would have had another caution I think we had a good shot at him. The car was firing off well on restarts. I couldn’t steer the car early on because the track was so fast. We weren’t set-up for it early on.”

Hudson O’Neal made his first Jackson 100 just one year ago, and ran second for most this race, before coming home in third place. “We are happy with this finish after last night’s run. I can’t thank everybody enough on the crew for getting this car up front tonight. The crew spent most of last night going through notes to make the car better for tonight and sure enough they did it.”