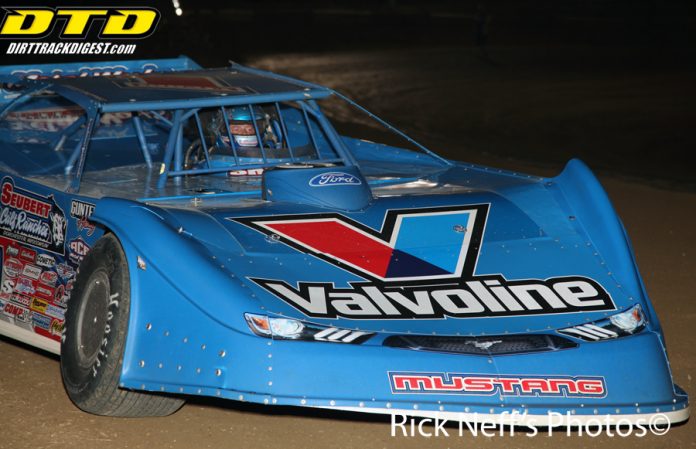 Sheppard’s win at 81 Speedway marks 17 wins in the books for the dominate driver this season. He is now tied for second with Darrell Lanigan for most single-season wins putting him only one win behind the record set in 2016 by his predecessor in the Rocket No.1 , Josh Richards.
“Between Kansas and Oklahoma- man, some heck of some race tracks,” said Sheppard. “They have some really awesome race tracks out here. Kind of darker dirt which is more like what I’m used to so I guess I just fit right in.”
Sheppard passed race-long leader Tyler Erb on lap 24 of the 40-lap event before running away from the field in the remaining circuits.
Erb, who started second for the feature, was able to gain the lead from pole-sitter Austin Siebert on the first lap. In 10 laps time, the young gun was able to create a 3.808 second lead between his No. 91 and the rest of the field.
Siebert sat in second for the first half of the event before surrendering to Sheppard’s charges on lap 22. The turning point for the race occured just one lap later when Brent Larson slowed between turns 3 and 4 bringing out the caution and clearing the ground Erb worked hard to create.
A single-file restart took the field back to green and Sheppard was able to capitalize. Sheppard chose the high line while Erb hugged the bottom of the 3/8-mile dirt oval. The duo, both driving in Rocket XR1s, crossed the line only 0.121 seconds apart.
In the remaining 16 laps, Sheppard expanded his lead to 4.469 seconds.
“I think we just made a little bit better call on tires than Erb did,” said Sheppard. “I think he had a really good car but I think I found that top a little bit sooner than he did. I thought for sure his crew guy would tell him to go to the top after that caution but I don’t know. I was still pretty far back at that point so maybe they didn’t see me back there but man- what a heck of a year. It’s been really great. I can’t thank Mark Richards and Steve Baker enough. These [Rocket] XR1s are just phenomenal. These things are top-notch and second to none.”
Erb settled for his sixth second-place run of the season and his fourth second-place run to his friend, Sheppard.
“I really didn’t want to see the caution but it happens,” said Erb. “It just wasn’t my night. Running second to Sheppy is as close as you can get to a win. He’s obviously the best car in the country. We were pretty good. We went a little softer on tires. It didn’t really hurt us but once he got going I couldn’t run that line up there. I’m just happy to run second. We’ve been kind of on a downhill for the past month or so.”
Siebert rounded out the podium scoring his highest World of Outlaws finish to date.
“It was a good night and a good Sunday for us and it’s awesome to be up here in third,” said Siebert. “It’s a confidence booster for me and my team. It’s a lot trickier than the mods that we’ve run in the past. There’s a lot to change and a lot to keep up on so it’s just a learning curve but it feels good to be here right now.”
The World of Outlaws Craftsman® Late Model Series has five more races on tap for the 2017 season with the next stop being at the Dirt Oval at Route 66 raceway in mid-October.
81 Speedway Abbreviated Results:
Craftsman Club Feature: 1. 1- Brandon Sheppard[3]; 2. 91- Tyler Erb[2]; 3. 16- Austin Siebert[1]; 4. 18c- Chase Junghans[10]; 5. 25- Shane Clanton[7]; 6. 9- Devin Moran[4]; 7. 1*- Chub Frank[6]; 8. 44- Chris Madden[5]; 9. 99jr- Frank Heckenast Jr[12]; 10. 7- Rick Eckert[8]; 11. 14m- Morgan  Bagley[13]; 12. 18- Eric Wells[9]; 13. B1- Brent Larson[11]; 14. 81- Mark Harrison[15]; 15. 4-Oct- Adam Popp[14]; 16. ’03- Jeremy Bishop[16]; DNS. 99- Gary Gorby[17]