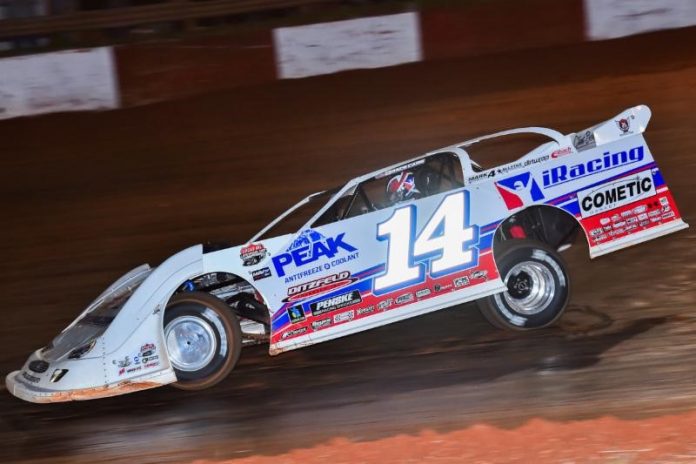 ROME, GA – Darrell Lanigan swept all activities he participated in Sunday night at Rome Speedway. Lanigan set the overall fastest time of the night in Miller Welders Time Trials, he won his heat race in convincing fashion, and he led all 50 laps on his way to win the Lucas Oil Late Model Dirt Series-sanctioned Rome Showdown in the Bowyer Dirt Motorsports, I-Racing.com, Club 29 entry.

Lanigan’s Bowyer teammate, Don O’Neal finished in the second position for the second night in a row. Tim McCreadie started seventh and charged to third-place finish, which enabled him to take over the season championship point standings. Chris Madden was fourth and 18th-place starter Earl Pearson Jr. drove an impressive race to finish fifth.

Lanigan started on the outside of the front row and was cruising along until Brandon Overton started his charge for the lead. Overton closed to within a car-length on Lanigan, but on lap 20 Overton suddenly slowed in turn four, bringing out the first caution of the race. Overton would pit, but he was never a factor after that.

On the restart, Lanigan pulled away from the field as several competitors took their shot at second place. Don O’Neal finally made it to second as he had to battle McCreadie in the final ten laps to garner his second runner-up finish in two nights.

In Lucas Oil Victory Lane for the second time this season, Lanigan was extremely happy with the performance of his race team. “Last night I jumped the cushion at Dixie and it cost us a good finish. Tonight, the car was just perfect from the time we unloaded it. Brian, Richie, and the entire crew have done a great job all year. We have had bad luck that knocked us out of some more wins. We are here to win,” said the 47-year-old veteran driver.

O’Neal continues his late season surge in the Peak Antifreeze and Coolant, Club 29. “Thanks to Clint Bowyer and everybody on the team. We have really got a good set-up on this car in the last month. We were running second at Knoxville and had a fan blade come off, and that knocked the water pump off. We were up to second at Brownstown last week and now two podium finishes this weekend. We are looking forward to Pittsburgh next weekend.”

McCreadie will enter the Pittsburgher 100 next weekend as the new series points leader in the Sweeteners Plus, Longhorn. “It feels great to be the point leader, but now we have to close it out strong. This team has worked so hard all year. Now it has come to crunch time. This is what we all work so hard for, a championship.”