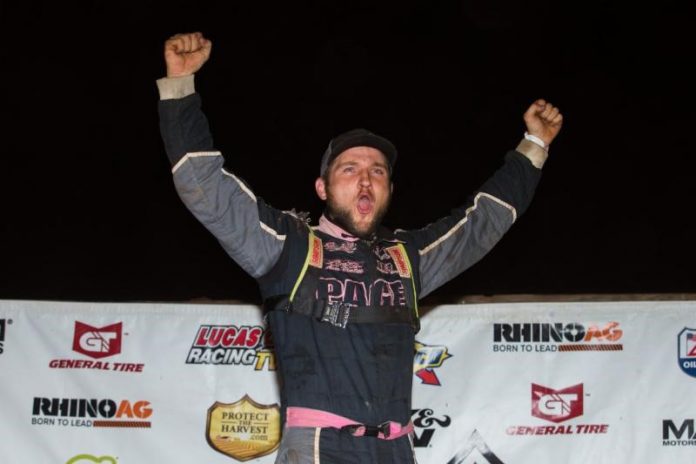 WOODSTOCK, GA – Michael Page scored the biggest win of his career on Saturday night by winning the Lucas Oil Dixie Shootout in front of a packed-grandstand at Dixie Speedway. Page, who has raced most of his career at the 3/8-mile oval, has grown up dreaming of winning this race at his home track. It became a reality as he became the seventeenth different winner this season in Lucas Oil Late Model Dirt Series competition.

O’Neal was in control of the event in the early going, before Page tracked him down in lapped traffic. On the restart after the final caution of the race on lap 46, Page saw O’Neal pull alongside him and threaten to retake the lead, but Page held off every challenge that O’Neal had for him to take the win.

“I figured if I was ever going to win it, tonight was it. It has been an up-and-down season and I am about wore out. I do what I can with a little team here,” said the emotional winner, who was surrounded in Lucas Oil Victory Lane with dozens of well-wishers. “When these Lucas Oil guys come here, you have to do something and tonight we did it.”

“I really didn’t want to move up on that last restart. I wasn’t worried about the right rear like I was the right front here. I just wasn’t pushing it too early. I was hoping he [O’Neal] would burn his stuff up and I think it worked out. I had a very good car here tonight. I want to thank Troy Baird and Stinger Race Cars. I am the only one here with one. It is a good race car. Thanks to all my help, my team, my mom and dad. Thanks to all of the fans here tonight and to those that believed in me, this one’s for you.”

O’Neal’s Peak Antifreeze and Coolant, Club 29 for Clint Bowyer was seeking his first Dixie Shootout win in 14 years. “I thought I had a shot to get back around him on that last restart. He did what he had to do he moved up there and blocked me. We were just two free getting into the turns. It was good run for us and hats off to him [Page] for the win.

Bloomquist moved to second in championship points with his podium finish. “It was a great points night for us. Hopefully we can get the lead at Rome and extend it out over these last three races. The car was good all night. I thought I could get by Don [O’Neal]. He was running the same line I was wanting to run. It killed our momentum there at the end. I want to thank Mike Reece, he was out here tonight and all my other great sponsors, we look forward to heading to Rome tomorrow night.

Lucas Oil Knoxville Nationals Back and Better Than Ever