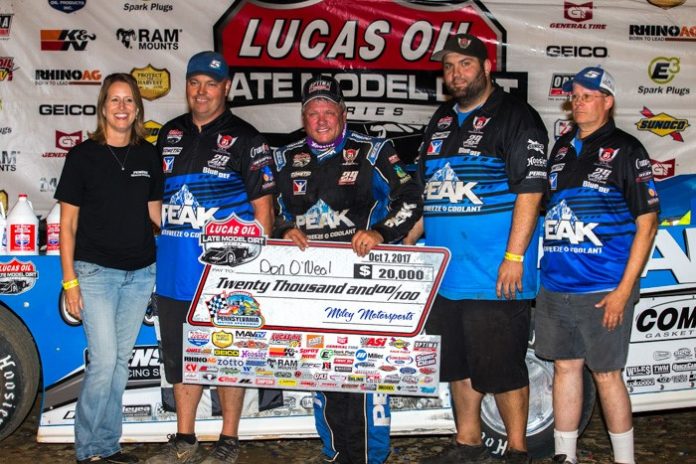 IMPERIAL, PA – Don O’Neal completed a weekend sweep, winning the 29th Annual Pittsburgher 100 on Saturday night at Pittsburgh’s Pennsylvania Motor Speedway. O’Neal led from start to finish to collect $20,000 for his first career win in the annual event. It was O’Neal’s second Lucas Oil Late Model Dirt Series win of the season as he led his Clint Bowyer teammate Darrell Lanigan in a one-two sweep for the NASCAR team owner. Josh Richards, the defending race winner came home in third.

Richards’ third-place finish moved him into second-place in the championship point standings with one race to go. Richards is now 40 points behind the leader, Tim McCreadie, who finished sixth in the race. Scott Bloomquist finished 18th and is now third in championship standings at 75 points behind McCreadie.

O’Neal waited through several caution flags during the race to score the win. O’Neal was untouchable after the restarts as nobody was within striking distance of him at any point during the race. O’Neal had a scare with a lapped car with two laps to go as he nearly got into the turn one wall. He escaped the mayhem unscathed and went on for a dominating victory.

In Lucas Oil Victory Lane, O’Neal commented on the roll his team is currently on. “Another podium finish sounds good, and this time we got the win,” said O’Neal. “Last week, we had two runner-up finishes and tonight the car was just fantastic, in fact all weekend long it was just perfect.” O’Neal completed the weekend sweep at Pittsburgh by setting a new track record and scoring a convincing win in his heat race in Friday night’s preliminaries.

“I would like to thank Clint and Casey Bowyer and everybody back at the shop, as well as Anthony Burroughs and Keir Hoover, they deserve all the credit. I wish we could go back to Speedweeks and start the season over.”

Lanigan and his I-Racing.com Club 29 followed his teammate to the line. “We have been really solid here recently, and it’s a great way to end the season. Congrats to Don on the win. Thanks to Clint and Casey Bowyer and all my crew.”

Richards and his Best Performance Motorsports, Rocket was looking for his third win in the famed event and ran as high as second, but eventually claimed the third finishing spot. “We had a good car tonight. There was quite a race among the top five after Don [O’Neal]. He [O’Neal] was unbeatable here tonight. This was a good points finish for us. We’ll head to Portsmouth with at least a decent shot at the title.”