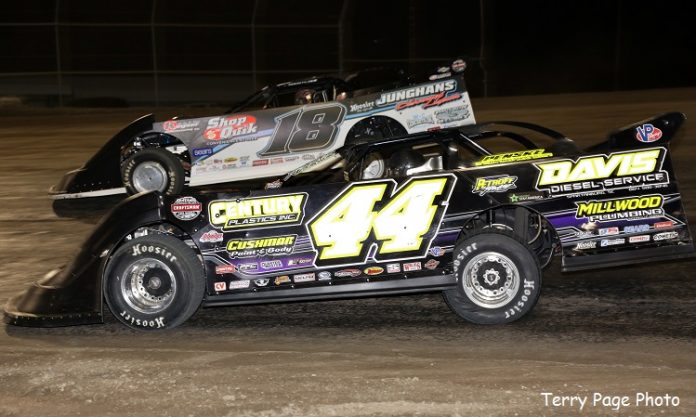 JOLIET, IL — Chris Madden had a dominating performance during the first night of the inaugural Chi-Town Showdown at the Dirt Oval @ Route 66 Raceway. Madden started the evening by setting quick time, then winning his heat, and topping it off by leading all 50-laps of the World of Outlaws Craftsman® Late Model Series Craftsman Club Feature.

Madden, who started on the pole for the main event, was never seriously challenged for the lead position. During the first 18 laps of the feature, the Gray Court, SC native was able to expand his lead to more than 5-seconds over the field before a caution fell which wiped it all away. Although, two additional cautions occurred during the 50-lap event, the last occurring with only nine laps remaining, Madden was able to finish 3.151-seconds ahead of the 25-car field to claim his sixth Outlaw win of the season.

“The competition is really strong out here and we’ve had some ups and downs out here towards the end of the year with help quitting and people not being able to hang in there to get the job done. We’ve picked up Colin [Pasi], A.j. [Allen], and Wil [Crowder]. Those guys are probably the hardest working guys that I’ve ever had,” said Madden. “We broke this car out last week and we had some odds and ends that needed to be fixed on it but we got it fixed this week and it was extremely awesome tonight.”

Not only did Madden bring out a new Longhorn Chassis, he also sported a new red and black paint scheme which he will be running through the remainder of the 2017 season as he closes the book on his first season with the World of Outlaws.


“It’s been a great [year] for us,” added Madden. “I’ve really enjoyed racing with all these guys. It’s been an experience and it has been one that I won’t forget. It’s been really fun and really professional with some of these guys.”

Rick Eckert, who started seventh in the feature, also seemed to effortlessly find his way around the 3/8-mile dirt oval. By lap 26, the driver from York, PA had steadily marched forward five positions as he claimed the second spot from Frank Heckenast Jr. Eckert’s second place finish totaled him with two podium finishes in the last three races.

“Once I got to second I couldn’t really hem in the bottom [of the track]. I moved up to the middle and kept a little better pace but [Madden] was definitely the class of the field,” said Eckert. “I really couldn’t race with him but I could race with everyone else and that’s a plus. That’s better than we’ve been, for sure.”

Despite Eckert’s look of ease around the racetrack, the No. 7 was experiencing a little engine trouble.

“We’ve been fighting a gremlin in the motor,” added Eckert. “It missed all last week and we keep changing stuff and we’re about out of stuff to change. I’m not sure where we’ll go next. It missed all feature again but it got slippery enough that it didn’t hinder us too bad.”

Series leader, Brandon Sheppard rounded out the podium at the Dirt Oval @ Route 66 Raceway on Friday evening. In the final five laps of the feature, Sheppard battled alongside Devin Moran and Bobby Pierce. On the last lap, Sheppard stole third from Moran to secure the final position on the podium.

“I got behind Shane [Clanton] there early in the race, and then I got into someone and knocked the nose a little loose, and then a clump of dirt came and caved it the rest of the way in,” explained Sheppard. “It made it hard to keep the front end on the ground, which made it a little hard to get through the middle corner, but we hung on and didn’t give up. That track was a little bit treacherous but it was really racy. There were guys running the bottom and guys running the top. It was a heck of a racetrack so a big thanks Sherri [Heckenast] and everyone who worked on the track.”

The World of Outlaws Craftsman Late Model Series will return to the Dirt Oval @ Route 66 on Saturday night for the final shootout for the Chi-Town Showdown.