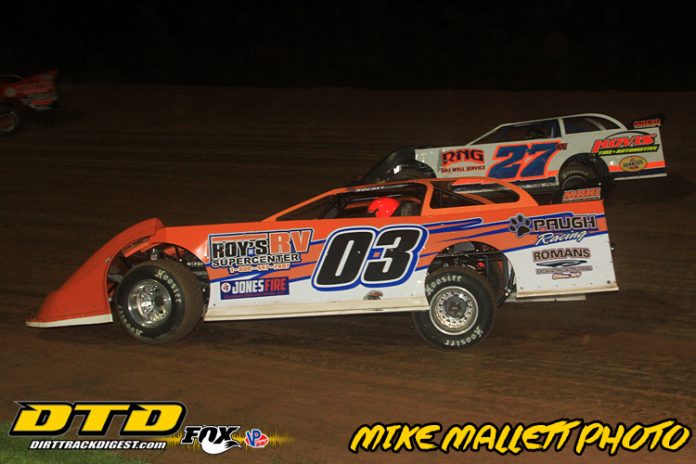 The Speedweek will get underway on Wednesday at Delaware followed by the short drive to Georgetown for Thursday night action before moving into the state of Maryland on Friday night at Potomac Speedway then wrapping up on Saturday at Virginia’s Winchester Speedway. Each event will be a “Marquee” distinction with $2,000 to-win. There will also be a $3,000 Speedweek point fund. And in addition, a $150 travel package will be available for each competing top 12 driver in 2017 Sweeney Tour points with details to be released at a later date.

“We really couldn’t be more thrilled with how this all came together,” expressed RUSH Director Vicki Emig. “This went from a stand-alone opening Tour show last year scheduled at Winchester to having Potomac join in followed by Georgetown and finally Delaware stepping up. We have to first thank Denise Hollidge and Greg Gunter of Winchester and Potomac for their initial belief in RUSH, which then led to the growth in the state of Delaware last year at DIS and Georgetown. Denise was also really behind this Speedweek concept, which led to Brett Deyo of Georgetown and the Cathells of Delaware joining in. Georgetown and Delaware are only 20 miles apart. Brett said he’ll even open up his facility for teams to stay at Georgetown following the Delaware event.”

Sister speedways, Potomac and Winchester, completed their fourth season of being under the RUSH weekly-sanctioned program. Potomac, which is located south of Washington, DC, runs the RUSH Late Models on Friday night, while Virginia’s Winchester has been one of RUSH’s highest consistent weekly car count tracks in recent years. Those tracks produced two of RUSH’s 2017 champions with Logan Roberson winning the $5,000 Sweeney Weekly Series title and Devin Brannon capturing the “Futures Cup” crown.

In Delaware’s first year under the RUSH Weekly Series banner, they averaged 19 cars per night over their 12 events with seven different winners as they transitioned from their longstanding 602 Crate Late Model program. Note: for 2018 DIS will follow RUSH Rules 100% and abandon the addendums for GM 602 and 604s that were put in place during the transition year. Meanwhile, Georgetown completed all three of their first ever RUSH-sanctioned events with Chip Disharoon, Sparky White, and Mike Wharton victorious as they averaged nearly 23 cars per night.

“We would like to thank Vicki Emig and her great staff, for their patience over the 2017 season, as we learned so much in just our first season with the organization,” stated Mark Cathell of DIS. “This RUSH Racing program has really brought some life back to our Crate Late Model division. Becoming part of the newly expanded Battle of the Bay and Touring Series, is an honor for us to be a part of next year! We look forward to more great things to come!”

A total of five Sweeney Tour Mid-Atlantic events have been completed all-time in the history of RUSH with Rick Singleton sweeping the events at Potomac and Winchester in 2014, while Walker Arthur did the same in 2015. The last completed Sweeney Tour event in the Mid-Atlantic was on June 13, 2015 when Allen Brannon won the “Crate Racin’ USA Nationals”. Due to some scheduling conflicts, no events were scheduled in the Mid-Atlantic in 2016. This past season, the Sweeney Tour was scheduled to open the season at Winchester on April 22, but rain forced the cancellation.

“The Mid-Atlantic racers have really been clamoring to have the ability to compete in a Touring Series event,” continued Emig. “They are a big part of our overall program, but it’s difficult for them to make it to one of our events. Now to have four shows in their backyard to open the season is quite a big deal. We’ve also had several of our top racers inquire about not only returning to the Mid-Atlantic, but also putting a speedweek together. This will be quite a way to kickoff our season, and with four consecutive nights of action should allow some outsiders to make their way in. We’ve already had several non-Tour regulars from the North express their excitement to participate.”

Delaware International Speedway is a 1/2-mile track located at 37854 Sussex Highway, Delmar, DE 19940. DIS is located on a 125 acre Motorsports Complex which house’s three racing facilities in one. The Speedway will celebrate their 48th consecutive year, when it opens in April of 2018. In 1965, the family built a 1/2 mile oval in the beginning and added a 1/4 mile oval inside just a couple years later. The Speedway, in its current location has been operating weekly dirt venues since 1970. Over the years, four generations of the family have been involved with the daily operations and ownership.

Today, three generations still work to bring dirt track racing to its loyal fans. Charles Cathell, CEO of the company, at the age of 75, still plays a major role in the daily decision making along with his brother Hal Cathell. Charlie’s son Mark, now works very closely with both his father and uncle, handling the majority of marketing and event promotions. Mark’s son Chad, over see’s race control on weekly events as well as specialty shows. Four generations deep is very hard to find these days, these types of mile stones can only be reach with years of dedication and perseverance. The Cathell family hopes to continue to support dirt track racing, for many more years to come! For more information on DIS, check out their website at www.delawareracing.com. The track office number is 302-846-3911. You can like their Facebook page at www.facebook.com/DelawareRacing and follow them on Twitter @delawareracing.

Deyo enters his third year at the helm of Georgetown Speedway- the historic half-mile clay oval located at 24505, 24513 S. Dupont Blvd, Georgetown, DE 19947. Deyo signed a three-year lease that runs through 2019 and improvements continue at the Sussex County track, which hosted its first race in 1950. The speedway operates on a special-events-only schedule with high-profile programs from March through October. For more information on Georgetown, check out their website at www.thegeorgetownspeedway.com. You can like their Facebook page at www.facebook.com/GeorgetownSpeedway and follow them on Twitter @thegtownspdwy.

Potomac Speedway is a high-banked 3/8-mile dirt track located on Route 234 at 27963 Budds Creek Road, Mechanicsville, MD 20659. The track first opened in 1973, and is located about an hour south of Washington D.C and Baltimore. For information, check out their website at www.potomacspeedway.com or call 301-481-8855. You can like their Facebook at www.facebook.com/PotomacSpdwy and follow them on Twitter @PotomacSpdwy.

Winchester Speedway is also a high-banked 3/8-mile dirt track located just off Route 50 at 950 Airport Road Winchester, VA 22604. The track first opened in 1936 under the name of Airport Speedway. The track has been home to the Winchester 200, a major Super Late Model event, since 1963! For more information, check out their website at www.winchestervaspeedway.com or call 301-481-8855. You can like their Facebook at www.facebook.com/wincvaspeedway and follow them on Twitter @Wincvaspeedway.