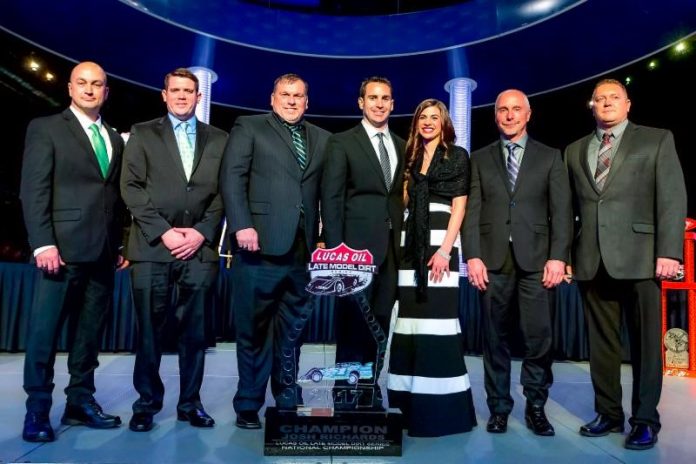 INDIANAPOLIS, IN – Josh Richards’ maiden season with the Lucas Oil Late Model Dirt Series officially came to a close Friday night with the annual Awards Gala at Lucas Oil Stadium in Indianapolis, where he was awarded the Championship title.

Richards and the Best Performance Motorsports team ended their banner season with the Lucas Oil Late Model Dirt Series with 10 wins, 28 top-fives, 38 top-ten performances and collecting a total of $415,050 in earnings.

“I’m so blessed to be able to do what I love,” said Richards. “I’d like to thank Eric [Brock] for believing in me and giving me this opportunity. “Without so many great people putting their faith in me, none of this would be possible. The team … Randall [Edwards] and Tyler [Nevins] and everyone involved with this the team, it means more to me to win it for them than it does for myself. I’m happy for all of them.”


Richards, who will drive for Best Performance Motorsports again in 2018, is ready to return to action. “I’m just ready to go race,” Richards said. “We’re not putting any pressure on ourselves. It’s the same as this year – just go out and race and try and get better each and every day.”

“Todd Burns has given me the world,” said an emotional O’Neal. “What an accomplishment this is for me and my team. It’s an honor to be standing on this stage in front of the best drivers in the world. I want to thank all my competitors for their advice, their support, and allowing me to live my dream. I am excited to be back with this team and chase the Lucas Oil tour in 2018.”

O’Neal attributes his success this season to the support of his sponsors, which include: Peak Antifreeze and Motor Oil, Tarpy Trucking, Sub-Surface of Indiana, West Side Tractor Sales Co, Kimball Midwest by Krissie, Mark Martin Automotive and Penske Racing Shocks.