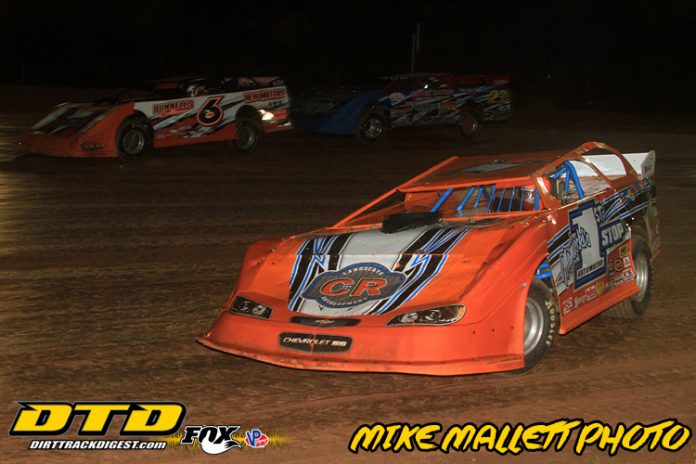 PULASKI, PA – The Sweeney Chevrolet Buick GMC RUSH Dirt Late Model Series powered by Pace Performance is set to begin its sixth year of operations heading into the 2018 season. The Series is proud to release the 2018 Touring Series schedule featuring a minimum of 18 events, which includes a Speedweek, two “Manufacturers Nights”, MAVTV, and returning signature events throughout the six-month slate.

“We’re thrilled how our 2018 Touring Series schedule came together,” expressed Series Director Vicki Emig. “The tracks seemed to get an early start on their scheduling and it’s allowed us to release our tentative schedule earlier than ever. We feel this year’s schedule is the most impressive to date with more $2,000 to-win shows, our new Battle of the Bay Speedweek with its own point fund, the addition of a much-anticipated Weedsport show with MAVTV, and all of our traditional events returning. The feedback from racers has been very positive.”

The 2018 slate will get underway with the inaugural “Battle of the Bay” Speedweek on April 18 and continue through the 21st. Besides $2,000 to-win events each night, the four-night Speedweek will also have a $3,000 point fund with $1,000 going to the champion. There will also be a $150 travel package for any Tour driver in the top 12 from 2017 that participates. Wednesday night will see action at Delaware International Speedway with the first ever Tour event at the Delmar, DE oval. DIS completed their first and successful season under the RUSH banner in 2017. On Thursday, action moves 20 miles to Delaware’s Georgetown Speedway . Promoter Brett Deyo sanctioned his three crate racing under the RUSH banner in 2017 and has expanded his slate to five events including the first ever Tour event at the track.


Speedweek then heads over to Maryland at Potomac Speedway. The Friday night Mid-Atlantic home to the RUSH Late Models last hosted a Tour event in the 2015 season. Greg Gunter’s sister track, Winchester (VA) Speedway, will close out the Speedweek on Saturday night. Like Potomac, Winchester will be entering their fifth season of RUSH weekly-sanctioned competition. Winchester held a pair of Tour events in 2015, but due to scheduling conflicts was unable to host an event in 2016, while last year’s scheduled opener was rained out.

The Sweeney Touring Series returns to Stateline Speedway for the second consecutive year for the “Bill Law Memorial” on May 19. The 2017 event was the first ever Tour event at the Busti, NY oval in the 10-year history of Crate Late Models in the Northeast. A big crowd watched a thriller as Jeremy Wonderling held off standout and track dominator Max Blair for the victory.

Eriez Speedway will once again host two $2,000 to-win “Marquee” events in 2018 at Kathy Rohrer’s track located just outside of Erie, Pa. in Hammett. The first will be on Sunday, May 27 during Memorial Day Weekend and then again on Sunday, July 29. There have been five RUSH Tour events completed all-time at Eriez and the Blairs have won all five with Max winning four and his father Rob one in a substitution role for Max.

For the second straight year, Outlaw and Genesee Speedway have teamed up to host back-to-back $2,000 to-win “Marquee” Events on Friday and Saturday, June 1-2. Outlaw’s show will again be dubbed as the “Gary Montgomery Memorial”. Last year’s event saw most of Montgomery’s former BRP Can-Am Super Stock stars battle it out for the victory with Bryce Davis winning his first of the year that propelled him to the 2017 title. The following night saw John Waters win at Genesee, which was the first ever Tour event at the Batavia, NY track. A second Tour race at Genesee will take place on Thursday, July 19 for a $1,500 to-win “Platinum” event that will include the second annual “traveling” Manufacturers Night presented by MSD Performance. Only regulars at Outlaw, Genesee, Fulton, and Humberstone will be eligible for product prizes on this night.

Like Eriez, Sunday night facility Tri-City Raceway Park will again host a pair of $2,000 to-win “Marquee” Tour events in 2018. The first on June 17 will be the annual “Bill Emig Memorial” honoring the legacy of the father of RUSH Director, Vicki Emig; while race two will occur on August 19 and will again by the site of “Manufacturers Night” presented by MSD Performance. Some $50,000 in cash and products have been distributed in the last two year’s events at the Franklin, Pa. oval. The 2016 event drew an all-time Northeast Crate Late Model car count record of 58 cars!

One of the most anticipated events of 2018 will take place on the night before Independence Day at NY’s Weedsport Speedway. The showplace will not only host their first ever RUSH-sanctioned event, but the $2,000 “Marquee” event will be televised by MAVTV and will re-air at a later date on by MAVTV and Speed Sport TV. Weedsport has been one of the most requested venues in recent years and this holiday mid-week special will allow all teams the ability to compete without conflicting with any other RUSH-sanctioned event.

172nd annual Trumbull County Fair in Cortland, Ohio is expected again to feature the RUSH Late Models for the 11th consecutive year at the 5/8-mile Expo Speedway track. This year’s event is slated for Wednesday, July 11 and will again be a $1,500 to-win “Platinum” event. Fairboard member and promoter Bud Rogers has been a longtime proponent of RUSH.

For the second straight year, Pittsburgh’s PA Motor Speedway will host a pair of Sweeney Tour events; both “Marquee” designations. And for the second time, the “Jook George Steel City Classic” will be a Tour event. The “Jook George” will take place on Saturday, August 11. Last year’s event attracted 43 cars and saw Mike Pegher, Jr. take home $4,010 thanks to the extraordinary efforts by Branden Lockwich . For the third straight year, the Sweeney Tour will be part of the “Pittsburgher” for the Lucas Oil Late Model Dirt Series on October 5-6. The $2,500 to-win event will again be the “Bill Hendren Memorial” and will feature additional prizes courtesy of the Hendren Family.

The McKean County Raceway is slated to host the annual Fair race for the RUSH Late Models on Thursday, August 16 paying $1,500 to-win in a “Platinum” event. There have been six different winners in as many Fair races at the East Smethport, Pa. track. A second event at McKean in the fall could be possible.

The season will once again conclude with the “Steel City Stampede” at Lernerville Speedway. Last year, John Waters became the ninth different winner in as many “Steel City Stampedes” with his $2,000 victory. The Sarver, Pa. oval is a great partner with RUSH running the RUSH Pro Stocks weekly, 10 events for the new RUSH Sprint Cars along with shows for the RUSH Sportsman Modifieds and RUSH Late Models.

Additional information on the Touring Series and other RUSH programs will be released throughout the winter months.


*Schedule is subject to change. Additional date(s) may be added.