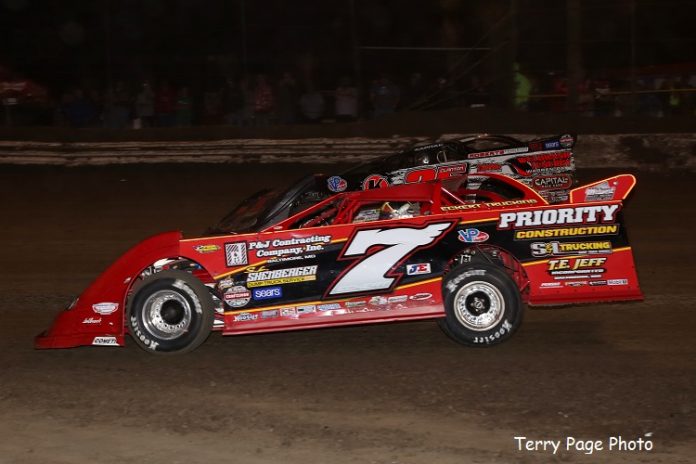 CONCORD, NC – When anyone in the motorsports world thinks about the start of any racing season, our minds automatically revert to palm trees and warm temperatures found in Florida in the month of February. When you’re a dirt track fan, your mind wanders to the famous Gator Pond and to the fastest half-mile dirt ovals in the country: Volusia Speedway Park. As the track celebrates its 50th anniversary, we need to look back to the past to appreciate the present and, in turn, look ahead to a very bright future.

Since 1968 there has been racing at Volusia Speedway Park, located west of Daytona Beach in Barberville, FL. Just a year after the track opened, then a quarter-mile dirt track, it expanded to a three-eighths mile dirt track and operated that way until 1971. In 1972, the track again expanded, this time to a half-mile dirt oval, and stayed that way until 1989 when it was paved. In 1997, the track reverted to its dirt roots and has remained that way ever since. In 1993, a three-eighths mile dirt oval opened behind turn four of the current oval and operated as such until 1998 when that was paved after the original oval went back to dirt. From 1998-2004, both tracks would operate simultaneously during the month of February giving fans who had traveled from all over, the best of both worlds on the same property. The smaller oval would operate as a pavement track until closing after the 2004 season and remnants of that track remain today.

Leading into the 50th anniversary of racing at Volusia, there have been 210 DIRTcar Late Model features in Barberville, FL, with six-time DIRTcar Summer Nationals Champion and National Dirt Late Model Hall of Famer Billy Moyer leading the way with 19 career wins. His last DIRTcar Late Model checkered flag came in 2012, while his last overall victory at Volusia came in a World of Outlaws race a year later, in 2013. The Batesville, AR legend scored his first victory at Volusia back in 1985. In 2016, his son, Billy Moyer Jr., joined him on the winners list as the second father/son combination to score feature wins after Jack Boggs (1981) and his son, Jackie Boggs (2004).


Between 1972 and 1976, Wayne Shugart recorded nine victories, which has stood the test of time all these years later at fourth all-time in career feature wins. Jack Boggs and Don O’Neal are tied for fifth at eight victories apiece, with O’Neal winning the 2017 finale, a World of Outlaws Craftsman Late Model Series sanctioned event, on February 25 – his first win at Volusia since February 15, 2011. That win broke a tie with 2011 World of Outlaws Champion Rick Eckert, who last visited the winners’ stage on February 17, 2006, some 12 years ago. Eckert stands along in seventh with seven wins.

With car counts ranging upwards of 50, the DIRTcar Nationals provides the perfect opportunity to set the tone for the remainder of the season, whether it’s chasing after a World of Outlaws title or racing elsewhere around the country. Moye leads all drivers with six DIRTcar-only feature wins, while Richards is tied with Bloomquist for second all-time in DIRTcar Late Model-only victories with four.

The 2005 season saw a changing of the guard in Florida during Speedweeks when World Racing Group took over operations at Volusia Speedway Park in February. The DIRTcar Nationals at the famed half-mile would reestablish a tradition of officially kicking off the new season in the dirt track racing world. The DIRTcar Late Models have been a part of that tradition and, along-with the World of Outlaws Craftsman Late Model Series, set the standard in premier dirt Late Model racing. The premier cars and stars in the full-bodied world mark the month of February as a time to establish themselves and show what the future might hold when looking ahead to the rest of the season.

Since that game-changing day of February 14, 2005 when York, PA’s Rick Eckert collected the first-ever DIRTcar Late Model feature win, there have been 22 different winners in 40 races. In 2017, eventual World of Outlaws Craftsman Late Model Series Champion Brandon Sheppard and runner-up Chris Madden both collected their first career Volusia wins on their way to a one-two finish in the final 2017 Series standings. Clanton, who would win the first World of Outlaws feature at Volusia on his way to his second DIRTcar Nationals title, would eventually finish third, behind Sheppard and Madden in the final 2017 World of Outlaws Craftsman Late Model Series points.

As Volusia Speedway Park celebrates 50 years of racing in February during Florida Speedweeks, the 2018 version of the DIRTcar Nationals, the 47th annual edition, will once again start with a pair of DIRTcar Late Model events on Monday and Tuesday, Feb. 12-13 before the World of Outlaws Craftsman Late Model Series takes over for four straight nights on Wednesday-Saturday, Feb. 14-17.