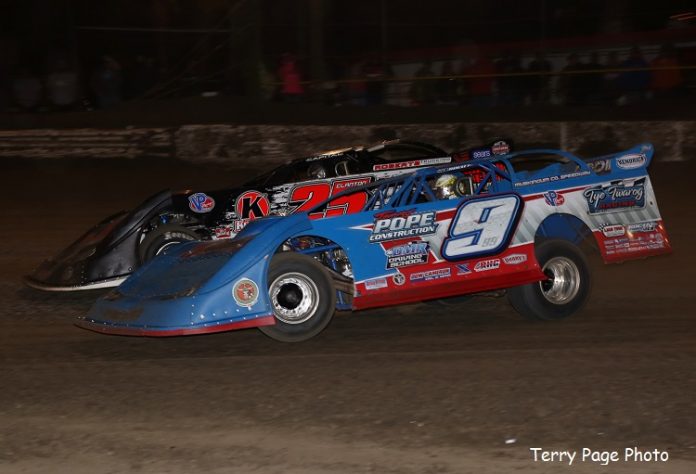 CONCORD, NC ­- The second week of the 47th annual DIRTcar Nationals at Volusia Speedway Park will be headlined by dirt Late Model competition. Two nights of DIRTcar Late Models (Feb. 12-13) followed by four nights of action for the World of Outlaws Craftsman® Late Model Series (Feb. 14-17) are in store for the final half of the 12-day short-track racing extravaganza.

A star-studded group of drivers plan to contend for the national tour’s $100,000 championship, including Series veterans, hopeful young guns and promising rookies. The first two weeks of the season, from the very first race at Screven Motor Speedway through DIRTcar Nationals, will set the bar for the remaining nearly 50 race season.

In a new twist to DIRTcar Nationals in 2018, Late Model competitors’ two best finishes from the four nights of World of Outlaws Late Model racing will count toward the 2018 championship. This alleviates the pressure of a once make-it-or-break-it stretch and allows drivers to focus on DIRTcar Nationals competition rather than having to worry about points racing towards the Series finale in November.

With this new update, many drivers will be seeking the Big Gator honor as the first feather in their cap this season. Here’s a few favorites who might be seen holding the Big Gator in Victory Lane on Feb. 17:


Brandon Sheppard­­- It’s tough to discount the reigning World of Outlaws Craftsman Late Model Series Champion as a major contender for the title. Despite the early stages of adjusting to his new Rocket 1 Racing team at DIRTcar Nationals last year, Sheppard was able to pick up a victory in DIRTcar competition on Feb. 21. As Sheppard and Rocket 1 Racing continued to mesh, the results spoke for themselves; the team dominated Series competition in 2017, amassing 18 wins in the process. Now in their second year together, Sheppard and Rocket 1 Racing are the team to beat entering Volusia, especially considering the team’s previous success – four Big Gators with Josh Richards – and their detailed notebook of the half-mile.

Shane Clanton- In 2017 the Georgia Bulldog commandeered the Big Gator after three top-five performances of four DIRTcar Nationals races, including one World of Outlaws win (Feb. 24). As a mainstay on the national tour since 2005, the 2015 Series Champion knows the importance of starting the season off strong and the preparation it takes to make it happen. Clanton has wrangled two Big Gators in the last three seasons and will be on the hunt to add another to his collection in 2018.

Chris Madden- Following a successful 2017 campaign with the World of Outlaws Craftsman Late Model Series, Madden joins forces with Dirt Late Model Hall of Famer Barry Wright for the upcoming season. Over the course of his first season on tour, Madden proved he is one of the most consistent drivers after finishing second in points with six wins, 24 top-five and 33 top-10 performances. Piloting the house car for Barry Wright Race Cars in 2018, Madden hopes to contend for the Championship by the time Textron Off Road World Finals hits in November, starting with a win (or two) at DIRTcar Nationals.

Rick Eckert- Cutting his teeth in racing in Pennsylvania, Scrub quickly took a liking to half-mile tracks – and it just so happens that Volusia Speedway Park is the World’s Fastest Half-Mile. Although he didn’t secure a DIRTcar Nationals win in 2017, his two wins of the season happened on similar sized tracks. The addition of a Big Gator to the King of Half-Miles collection would be a cherry on top of his storied Outlaws career.

Brandon Overton- After a one-year hiatus from World of Outlaws competition, Overton rejoins the tour this season alongside Randy Weaver’s Dream Team. In 2017, the Evans, GA native, “Big Sexy” and his team swept the south by winning two championship titles in a regional series and 21 feature wins, including two World of Outlaws wins (Smoky Mountain on May 13 and Lernerville Speedway on June 24). At this point, Overton has only committed to running with the tour through May, so it is imperative that he gets off to a great start at DIRTcar Nationals if he hopes to remain a front-runner for the first half of the season.

Mike Marlar- Taking a stab at the World of Outlaws Craftsman Late Model Series Championship title for the first time in his career, the Winfield Warrior has high expectations for the upcoming season. He didn’t enter DIRTcar Nationals competition last year but did join 17 other Outlaws races throughout the season, totaling one win, 11 top-five and 13 top-10 performances. Marlar has expressed his excitement for the upcoming season and the gratification of reaching this point in his career. Coming into the season on a high, Marlar is sure to park it in Victory Lane early and often.

Wildcards – It won’t be an easy task to wrangle the Big Gator with more than 50 of the top late model drivers in the country already entered into DIRTcar Nationals competition, all of whom are vying for the title. With a huge field of stellar racers, even the front-runners mentioned above will have to keep the pressure on because it’s really anybody’s guess who will take the Big Gator home.

For a full list of drivers and additional updates from DIRTcar Nationals including detailed schedules, line-ups and all of the behind the scene action make sure to follow the World of Outlaws Craftsman Late Model Series on Twitter and Facebook. Want to see firsthand how these storylines play out? Get your tickets to DIRTcar Nationals today!