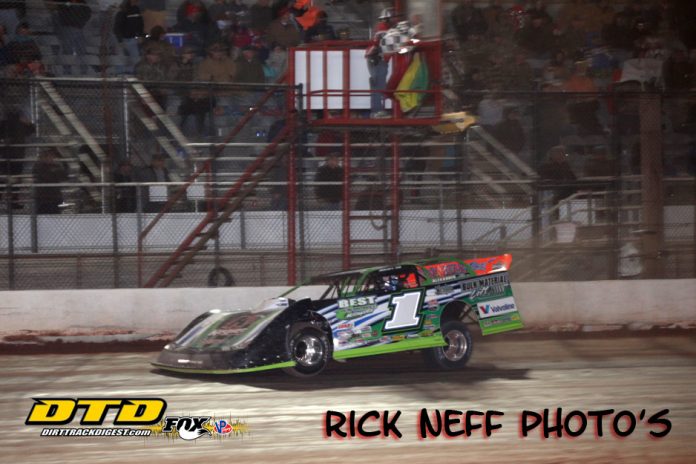 Richards took the lead from Jonathan Davenport on lap five and then held off a furious late-race charge from the 15th-place starting O’Neal. O’Neal made what appeared to be a winning pass on Richards in turns three and four on the final lap, but Scott Bloomquist was sitting in the middle of turn four and brought out a caution, negating O’Neal’s pass for the lead.

In the end, Richards was able to hold off O’Neal to score his twenty-third career LOLMDS victory. The driver of the Best Performance Motorsports car took the first event of the season over O’Neal, Davenport, Jimmy Owens, and Brandon Sheppard.

Richards and Davenport exchanged the lead three times in the first five laps of the 50-lap main event, with Richards forging ahead. Owens challenged Davenport for third, and finally got by him. Owens ran in second for several laps until O’Neal and Davenport got around him late in the race.

Richards breathed a sigh of relief in Lucas Oil Victory Lane, “I knew I was a sitting duck, I didn’t pay attention to the scoreboard. I thought I was protecting the top from Davenport making the pass and here comes Hudson on the bottom. He got to the bottom of the burm in turn three and got by, but then the caution came out.”


“We were too tight to steer down off turn two. I thought I had lost the race. Fortunately, the caution came out and we were able to hold him [O’Neal] off on the last lap. It is a great way to start the season. We didn’t run Gateway and Arizona like some of the guys did. We were getting ready for this. There really isn’t an off-season anymore. If the race stays green, he [O’Neal] would have had us.”

While the 17-year-old O’Neal was denied his first career LOLMDS feature, he was happy with his close call. “I just wish we hadn’t started so far back. We probably had the fastest car during the race. Yes, it was a desperate pass there on Josh on that final lap and then I saw the caution flag and said oh no. We can build on this. It is just a matter of time before we get that first Lucas Oil win.”

Davenport was looking for his fourth career win at Golden Isles, and felt he had a good run for his new race team, owned by Lance Landers. “This is a new engine combo that I haven’t run before. It will take a little bit of time to get used to that. I didn’t cut up my right rear tire enough. I was hoping some cars would run the top and help clean it off more. It was a great run for us and we will back tomorrow night after making some adjustments.”