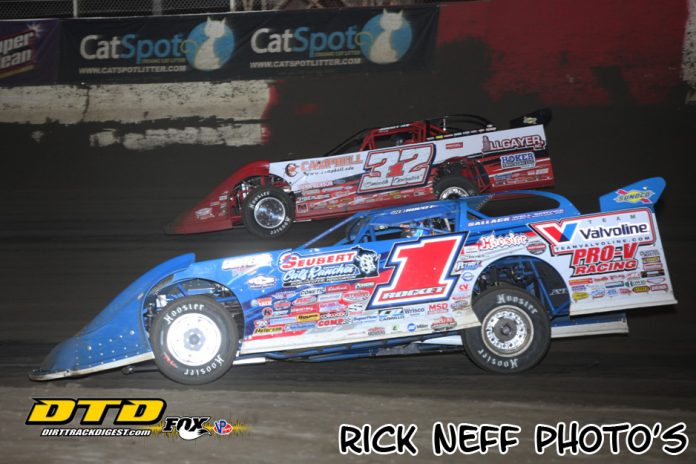 Sheppard won the Winternationals opener on Monday night. Tonight, he took the lead from Tyler Erb on lap 22 and then held off Hall-of-Famer Scott Bloomquist for the win. Trailing Sheppard and Bloomquist to the finish line were Devin Moran, Josh Richards, and Tyler Erb.

Jimmy Owens led the first two laps of the 40-lap main event before Kyle Bronson took the top spot. Bronson led one circuit until ninth-place starter Tyler Erb surged by him for the lead of the race. Erb then held the point until Sheppard’s charge from the inside of row 11 was complete, taking the lead which he never relinquished.

“I was very concerned those last nine laps,” said the winner in Lucas Oil Victory Lane. “I was having trouble seeing my signal guys. I didn’t really know how close they were to me. I swear I kept hearing a rattling in my left rear. I don’t what that was about. We worked hard to get up there. It was gritty out there on the surface. We qualified a little better than we have been. We got in that wreck in the heat and then we broke a driveshaft and knocked the rear end out of it before having to come out of the B-Main, it was long night for sure.”

“My team just never quit on me. Thanks to Mark Richards, Steve Baker, everybody at Rocket Chassis, my crew, Dan, Austin, J.T., Brian, and everyone else. Thanks to my dad and grandpa back home. This race is for my grandpa, he had pretty serious neck surgery this morning. Thanks to them for giving me a racing career to begin with. My girlfriend, son, daughter, and everybody who was watching back home.”

Bloomquist started on the pole in his New Direction Ag sponsored car and never led a lap, but heavily pressured Sheppard to the very end. “It was little bit of tire management at the end. We put a little pressure on him. We dived down to the inside a couple of times. I got loose in one of the corners and he was able to get away from me enough. I said to myself you better not push your luck here. The car was good but we have a couple more things to work on. We have done a lot of testing here this week. The points get back going tomorrow night so hopefully we can have a good run. We should be on our game for the next three races.”

Moran in his Tye Twarog-owned, Tommy Pope Construction, Rocket battled from eleventh to take his second podium finish of the week. “This track was really crazy tonight. I really wasn’t expecting to do what it did. But we adapted, and we crept up through there. We struggled a little bit last night, but the start to the week was good. I don’t know what to do but we have got to where we can beat that blue and white number one car.”