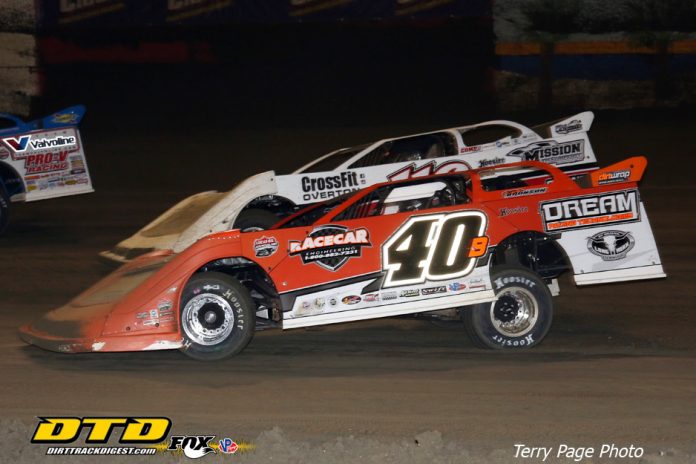 TAMPA, FL – Kyle Bronson raced to the biggest victory of his career on Saturday night during the finale of the Wrisco Industries Winternationals – presented by E3 Spark Plugs. Bronson lives only a short distance from the race track and managed to defend his home turf valiantly. He took the lead on lap 55 and then held off Jonathan Davenport for the win, in front of a capacity grandstand.

Bronson marked his first career Lucas Oil Late Model Dirt Series win, after charging from the tenth starting spot. The $12,000 payday was the richest in the 27-year-old’s career-to-date. Bronson was the sixth different leader of the highly entertaining race.

Davenport and Billy Moyer Jr.; a pair of Crop Production Services sponsored entries; started on the front row with Davenport grabbing the early lead. Moyer Jr. gained the top spot from Davenport on the fourth lap. Scott Bloomquist became the third leader of the race on lap ten. Bloomquist held the top spot until Richards took charge on lap 27. A caution with 20 laps to go bunched the field up and that allowed Overton to zoom into the lead on lap 42. Bronson began to make his move on the field as he quickly closed in on Overton. After a lap 53 caution then restart, Bronson took just two laps to gain the lead, driving around Overton coming off turn number two.

Bronson had to withstand one more caution with 57 laps complete to seal the deal. Davenport closed the gap on Bronson in the final laps but fell just short at the checkers. Bronson went to Victory Lane in the Longhorn by Weaver, Durham-powered entry sponsored by Brandon Ford, Brandon Collision, Racecar Engineering, and Dream Team Technologies.


“I got up to second and I thought how quickly I was catching him [Overton]. I was going for the win and I threw tire conservation out the window. Everybody has a lot of laps here now. It’s great to win in front this big crowd. It has been a long-time-coming. This is only our second win ever in a super late model. I want to dedicate this to Bo Hammond, who passed away last week. He taught me a lot about these cars, without him I don’t know where I would be. Thanks to Randy Weaver for all he has done for our team.”

Davenport, who was seeking his third win of 2018, knew a good-points night was helpful in the battle for this year’s championship. “It was a very good point night. Congratulations to Kyle on the win, he drove a heck of a race. I wasn’t going to do anything crazy there at the end. The car really came to life after that last caution. I got underneath him going into three and four, but I couldn’t quite get there.”