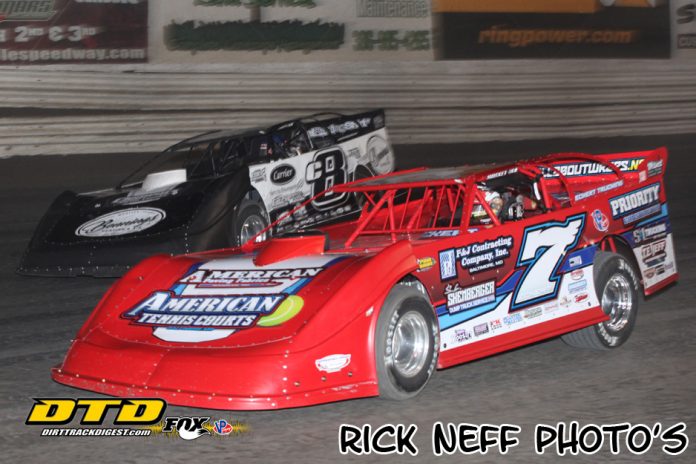 MARYVILLE, TN – The Tennessee Tipoff on March 9-10 at Smoky Mountain Speedway is definitely going to be “two” big to miss. The World of Outlaws Craftsman® Late Model Series will lead an expected huge field of star drivers into two, complete $10,000-to-win events.

The Outlaws are coming off four consecutive nights of DIRTcar Nationals action in Florida where four different drivers found their way to Victory Lane, including Tim McCreadie (Feb. 14), Dale McDowell (Feb. 15), Scott Bloomquist (Feb. 16), and defending series champion Brandon Sheppard (Feb. 17). The battle for the crown is as close as ever with racers setting their sights on Smoky Mountain to stake their claim to the championship lead.

Tennessee native Mike Marlar is especially excited to return home from Florida in February and Volusia’s tricky, high-speed half-mile oval. Joining the tour full-time in 2018, Marlar is eager to take on the 4/10-mile just south of Knoxville, TN, as the competition ratchets up for the Outlaws’ first back-to-back shootouts at Smoky Mountain with more than $100,000 on the line over the two nights.

“The Tennessee Tipoff is a pretty big event and the racetrack and facility at Smoky Mountain is a really awesome place,” said Marlar, who had 11 top-five’s in 16 starts with the Outlaws in 2017. “It’s the first time at home that you’re going to see all of the guys that are heavy-hitters come out and race.”

Marlar is hoping his Tennessee roots will give him an advantage, but he knows the Volunteer State is loaded with superstars all looking to Smoky Mountain to pocket some of the big money on the line.


“You know, living in Tennessee, it’s hard to be the best guy from Tennessee,” Marlar said. “There’s some pretty good guys from right around the area. For starters, Scott [Bloomquist] has probably ran more laps [at Smoky Mountain] than anyone. Then Jimmy [Owens], it’s close to home for him, too. Billy Ogle has won races there and Dale [McDowell] is pretty much from Chattanooga, so he’s right there too. Some of the best guys in the country are in a three-hour radius [from Smoky Mountain]. … If can race in Tennessee with these guys, I know I have just as good of a shot winning anywhere.”

Many of the top late model drivers from around the country will invade Smoky Mountain Speedway for the Tennessee Tipoff, including Brandon Overton, the 2015 Rookie of the Year who won last year’s one-day Outlaw event at Smoky Mountain. After his win in 2017 Overton attributed his success to his Randy Weaver Dream Team based in Crossville, TN.

“I suck here so bad most of the time and I’ve watched every Dirt on Dirt video of this place I can and the whole time I was out there I was thinking about everything that Randy [Weaver] told me,” Overton said in Smoky Mountain Speedway’s Victory Lane on May 13, 2017. “Obviously, he’s won a lot of races over here and knows how to get around this place so every time I would make a mistake, I’d make sure not to do it again.”

Additional drivers who have entered into the Tennessee Tipoff in the past include Bloomquist, who is the only two-time Outlaws event winner at Smoky Mountain Speedway (2015 and 2016). Chris Madden, of Gray Court, SC, has already proved to be one of the most consistent drivers on tour, collecting the DIRTcar Nationals Big Gator Championship with his new Barry Wright Race Cars team. Defending series champion Sheppard is back on top heading to Smoky Mountain, but he’ll be challenged by the likes of former series champions Shane Clanton and Rick Eckert, plus last year’s top rookie Devin Moran. In all, drivers representing at least 16 different states are expected to roll into the pits for this year’s event, making it one of the biggest races in the track history.

A night of practice on March 8 will lead up to two nights of action featuring qualifying, heat races, Last Chance Showdown and 50-lap Craftsman Club Feature events each night. Joining the Outlaws will be the NeSmith Chevrolet Late Models and the Kajun Mini Stocks.

Advanced tickets are on sale now, including the special tiered parking area overlooking the backstretch. A three-day package is only $50. Buy your tickets online today or call 844-DIRT-TIX.