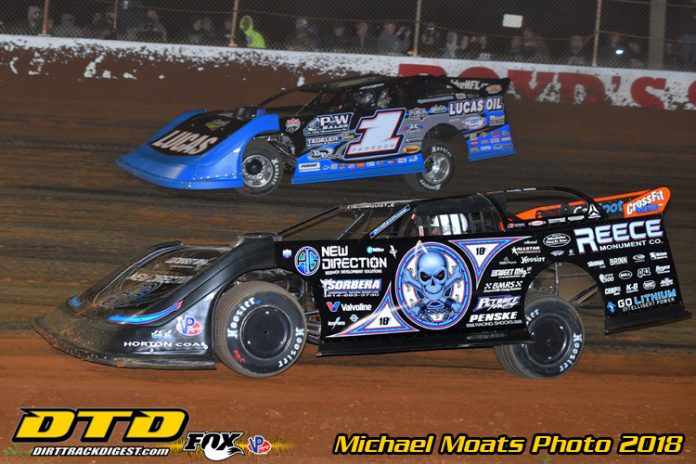 RINGGOLD, GA – In a battle between two former Lucas Oil Late Model Dirt Series National Champions, Earl Pearson Jr. passed Scott Bloomquist on the final lap to win “The Shamrock” on Friday night at Boyd’s Speedway. Pearson started sixth, kept a steady pace for most of the race, and then passed four cars in the final three laps to gain the victory. The win marks his first for the newly formed Black Diamond Race Team and Ronnie Stuckey.

The polesitter, Chris Madden, led the first 25 laps until Bloomquist forged ahead on lap 26. The entire 50 lap feature was run under green flag conditions, with no caution flags. Bloomquist looked to be in control of the race, looking for his first series win of the season. Stretching his lead out over the field, Bloomquist easily worked lapped cars, but Pearson had other ideas as the four-time series champ readied himself before his last lap charge.

As the two drivers took the white flag, Bloomquist’s car drifted out of turn two up against the wall and Pearson ran on the bottom. As the duo entered turns three and four Pearson had the momentum on the bottom side and he was able to pass Bloomquist coming off turn four to become the sixth different winner this season for the Lucas Oil Late Model Dirt Series tour.

Pearson who led all 50 laps in winning the Shamrock 50 a year ago at Boyd’s, led only lap on Friday night for the win. “I knew our car was good around the bottom. Those guys were running in the middle for most of the race. My hats off to Black Diamond Chassis, Ronnie Stuckey and all the guys back at the shop. J.C. Wright and Garrett Alberson for their help. They worked their tails off all day. Our car has been good all day. Everything just came to us and to pass Scott at the end, what a heck of a finish.”


“We could turn around the bottom pretty well. Our car could move around a little bit out there for a long time. It was a heck of a race. [Dale] McDowell and his crew did a great job with the race track tonight. I appreciate all the fans coming out and I think they saw a whale of a show.”

Bloomquist said his car was really good as the veteran driver entered the night fifteenth in points and in the need of a good finish. “If we would have had one caution I think we would have been saved. Everytime I carried the momentum into the turn the car would drift out. I didn’t realize he [Pearson] was quite that close. It’s just the way it goes sometimes. I felt like we had the best car tonight.” 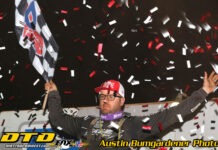 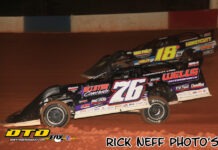 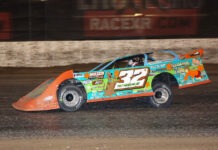