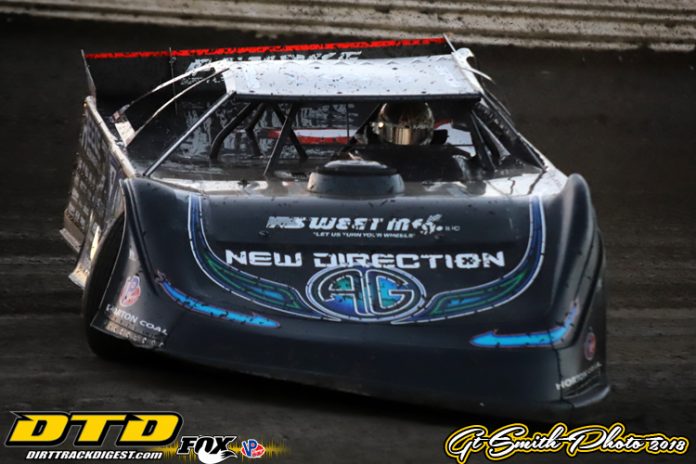 CHILLICOTHE, OH – Scott Bloomquist lead flag-to-flag to win the Lucas Oil Late Model Dirt Series-sanctioned, Buckeye Spring 50 at Atomic Speedway. The 54-year-old, Hall-of-Famer became the seventh different winner this season on the LOLMDS tour.
Don O’Neal and Tim McCreadie tracked down Bloomquist late in the race as the leader was negotiating lapped traffic, but Bloomquist pulled away in the last few laps for the victory. O’Neal had his best LOLMDS finish of the season with tonight’s second-place showing for the Clint Bowyer Dirt Motorsports, Peak Antifreeze and Coolant, Club 29. McCreadie finished third in the Sweeteners Plus, Pro Power, Longhorn. Completing the top five were Brandon Sheppard and Jonathan Davenport. Davenport was also the Optima Batteries Hard Charger of the Race, after starting 23rd.
Don O’Neal and Bloomquist started on the front row together. Bloomquist stormed to the lead at the start. The race for second-place lasted all 50-laps as O’Neal and McCreadie swapped the position several times during the race.
McCreadie was taking a run at Bloomquist until a caution came out on the 20th circuit. After each caution flag, Bloomquist managed to pull away from the field. No one got close to him until the final six laps when O’Neal and McCreadie were gaining on him in lapped traffic. Neither could get close enough to challenge Bloomquist for the win in the waning laps.
“We had a good night. We started out good in qualifying and the rest of the night the car was just awesome. The track got pretty slick and blacked off. At the end I just decided to set it high and let it sail. The car got through traffic pretty good. All-in-all I can’t say enough about the car and engine combination. Everything was great. This Sweet-Bloomquist car was sweet tonight and the Andy Durham Engine ran perfect. It was another good points night.”
“It was a good solid run, but definitely not what we wanted,” said O’Neal who has now garnered two podium finishes in the last two events. “The zero car was just better than us. He was better through traffic. My team’s been working hard. We are making progress no doubt. McCreadie and I had a lot of good restarts. You didn’t know whether to pick the inside or the out on the restart. We all were pretty equal it was just the case whoever got out in front was going to win.”
“It was nice to be near the front tonight,” said McCreadie afterwards. “This run is a credit to all the guys back at the shop and all the hard work they do. We’ve been looking for some things since they massaged the rules a little bit. We had to change our stuff around. Hopefully that’s all over with it and now we can show what we can do the rest of the season.”
The winner’s car is sponsored by New Direction Ag, Reece Monument Company, Sweet Manufacturing, Sorbera Chiropractic, Penske Shocks, Valvoline, All-Star Performance, Cross-Fit by Overton, Petroff Towing, and Catspot.
Lucas Oil Late Model Dirt Series
Race Summary
Friday, April 13th, 2018
Buckeye Spring 50
Atomic Speedway – Chillicothe, OH