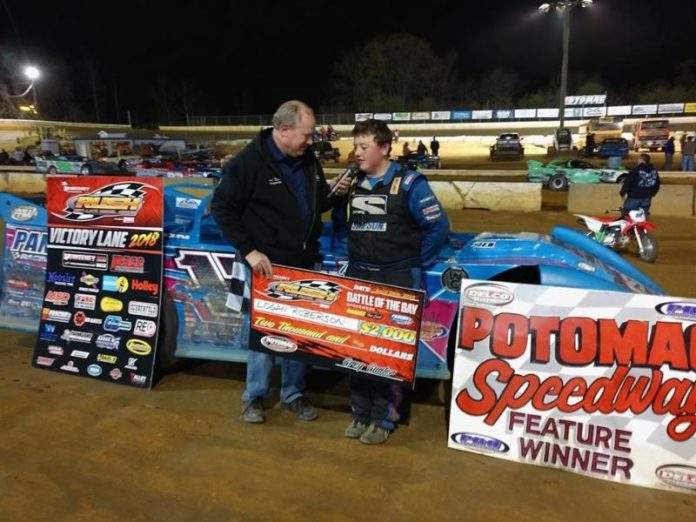 MECHANICSVILLE, MD – The Sweeney Chevrolet Buick GMC RUSH Dirt Late Model Touring Series powered by Pace Performance was back in action on Friday night at Potomac Speedway for the first time in four years at the Maryland oval. It was night three of the four-night inaugural “Battle of the Bay” Mid-Atlantic Speedweek presented by Pancho’s Racing Products, which attracted 41 cars from six states (Delaware, Maryland, Virginia, West Virginia, Pennsylvania & New York) along with Ontario, Canada.

After finishing fifth in the first two nights at Delaware International and Georgetown Speedways, Logan Roberson passed “Battle of the Bay” point leader, Ross Robinson, on lap 14 to capture his first career Sweeney Tour victory at his Friday night home track- Potomac Speedway. For Roberson, it was milestone win number 50 of his young Crate Late Model career, but first career National Touring victory of any kind. Roberson became the third different winner in as many nights of the “Battle of the Bay” presented by Pancho’s to keep him right in the Series champion hunt.

“It’s been my wish for quite awhile to win one of these Tour races,” expressed the 20-year-old Waynesboro, VA driver. “Vicki (Emig) and Mike (Leone) put on such a great Series. I’m just blessed to be able to race and win against the type of competition. I can’t thank my team enough for giving me a good car to race. I just had to hold the steering wheel tonight. This thing is awesome. Ross (Robinson) is no slouch. I tried everything in my books and luckily I got him. He had a good run and I’d like to thank him for running me clean. We raced hard and run aggressive, but that’s how it goes in crate racing. Nothing makes me prouder when I pull into victory lane and see the smile on my mom and dad’s face. I couldn’t ask for anything else.”

After winning the K&N Dash, Robinson took off in the lead in the 30-lap feature event looking to repeat Thursday night’s victory at Georgetown. Roberson meanwhile started third and passed track regular, Jamie Sutphin, on the opening lap for second. Roberson began to pressure Robinson, while Amanda Whaley was all over Sutphin in the battle for third. Whaley tried to get under Sutphin on lap nine, but got sideways and lost a lot of ground; however, was still able to maintain fourth. She began to feel the pressure from Blair and Darren Alvey, who entered the night with a two-race win streak at Potomac.


Robinson caught lapped traffic on lap 13, but a caution for the slowing Billy Beachler, who was making his “Battle of the Bay” debut, changed the course of the event after 13 non-stop laps. When racing resumed, Roberson got a good restart and made the outside work to steal the lead from Robinson on the 14th circuit. It was a mad scramble behind as Alvey and eighth starting John Waters made their way into fourth and fifth.

Six cautions would then slow the event between laps 15 and 21 as drivers were fighting for the bottom of the speedway. After dropping back to as far as eighth, Blair worked his way forward and back into contention getting under and past Whaley for third on lap 24. Two laps later, another fine run by Whaley ended when she slowed with electrical issues, and was chosen as the TBM Brakes “Tough Brake of the Night” recipient.

As the laps wound down, Robinson would be unable to make a challenge on Roberson as Roberson’s Dirt Defender/BTS Towing Service/Pancho’s Racing Products/QA1 Shocks/Race 1/Sunoco/All About Wraps-sponsored #17 Rocket Chassis became the 31st different driver all-time to win a Sweeney RUSH Tour event.

Robinson’s runner-up gave him three podium finishes in as many “Battle of the Bay” races as he leads Blair by four points heading into Saturday’s finale. “He got me- the best car won,” stated the 27-year-old Georgetown, DE driver. “He has a lot of laps around this place in a crate car. They do their homework and go on the road to do what they have to do to get better. I had a couple shots at him, but couldn’t get him. He earned it, and congrats to his guys- they go a great job. It’s going to be a dog fight heading into Winchester, but hopefully the experience I have there will pay off.”

Blair was third and maintained the Sweeney Tour point lead. Ninth starting Matt Hill was able to get by Chuck Bowie on the final lap to finish fourth for his third top five of the week. Bowie, who failed to qualify for the feature in the first two “Battle of the Bay” events, had a solid fifth at his home track. Sutphin dropped to sixth in his first “Battle of the Bay” start. Matt Glanden was seventh for his best finish of the week as was Jason Knowles in eighth, who earned the $100 Precise “Pedal Down” Hard Charger for advancing 15 positions. Braeden Dillinger was ninth in his first Tour start since the 2016 season finale at Lernerville Speedway. Darrell Bossard went from 16th to 10th for his third top 10 of the week.

In his first ever Crate Late Model start, Jimmy Jesmer, Jr. led all 10 laps of the non-qualifier race in dominating fashion. Jesmer celebrated the $175 win in victory lane with his father, who was celebrating his birthday. The 24-year-old Pasadena, Maryland driver became the 29th different “Wheelman” Bonus Event Challenge Series winner in 33 races run all-time in his PJ Motorsports/Penske Racing Shocks-sponsored #747. Track regular Jeff Pilkerton passed Beamer Guzzardi on the opening lap for second then fended him off the entire way. Megan Mann was fourth. Cory Lawler, whose father Pancho is presenting the “Battle of the Bay” Speedweek, raced from 10th to fifth.

The Sweeney Tour will resume action on Saturday night (April 21) at Winchester Speedway in Winchester, Virginia for the first time in three years in night four of the “Battle of the Bay” presented by Pancho’s Racing Products. Pits open at 2 p.m. with the drivers meeting at 5, warm-ups at 5:30 followed by qualifying and heat races.