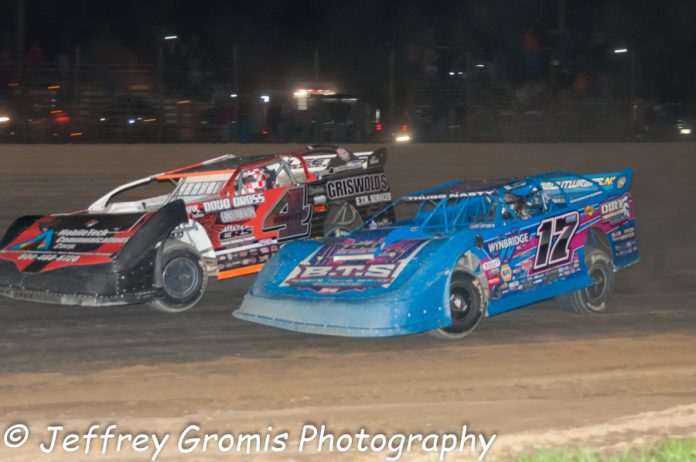 One night after winning his first National Touring Series event of any kind at Potomac Speedway, Logan Roberson put a beat down on a stellar field of competitors Saturday night sweeping the night by setting a new track record in qualifying, winning his heat race, the K&N Dash, and leading all 30 laps of the feature. The $2,125 sweep also propelled Roberson to the $1,000 “Battle of the Bay” title by just one-point over Thursday’s Georgetown winner, Ross Robinson, and two points over Wednesday’s Delaware winner, Max Blair!

“We struggled the first two nights but it’s nice to get back home and to win against this competition is great,” expressed the 20-year-old Waynesboro, VA driver. “To win two tour events back-to-back means a lot. You have Max Blair, Ross Robinson, and Jeremy Wonderling. I watch those guys on Facebook win 10 to 30 races a year. To beat them, you know you’ve beat the best in crate racing. I enjoyed it. I can’t thank my family, friends, and sponsors enough. It’s been a dream come true to do what I do. It’s a lot of fun, and to meet great people- I love it. Vicki (Emig) and Mike (Leone) put on such a great series. My crew gave me a great car again. I just had to hold the steering wheel. I made a few mistakes in the feature that almost cost me.”

Roberson led Jeremy Wonderling, Tanner Kerr, Amanda Whaley, and John Waters for the first seven non-stop laps of the feature until Billy Thompson slowed to bring out the event’s only caution as the final 23 went caution-free. Waters made his way under and past Whaley for fourth on lap 10 as Whaley’s boyfriend, Robinson, followed in fifth on lap 13. Meanwhile, Roberson had distanced himself from the field and had a straightaway lead by the time he caught lapped traffic on lap 19.


Roberson had to work his way through heavy lapped traffic on lap 28 as Jason Genco, Adam Ferri, and Devin Brannon were all battling for position. Once he did, it was clear sailing as Roberson took the checkered flag first by a commanding 2.686 seconds in his Dirt Defender/BTS Towing Service/Pancho’s Racing Products/QA1 Shocks/Race 1/Sunoco/All About Wraps-sponsored #17.

Wonderling, a Sweeney Touring Series regular, ended the “Battle of the Bay” with his best performance taking the $1,000 runner-up. “Congratulations to Logan,” stated the Scio, NY driver. “He deserves it- he runs well. I’ve never been here before so I really didn’t know what to do, but things worked pretty well. It’s good end to the week. I tried everything I could to narrow the window down, but he kept seeming to get better so I gave up and just tried to maintain my line.”

In his first ever Tour start, Kerr was an impressive third. “Hats off to Logan (Roberson) and his crew,” expressed the hometown Winchester driver. “I have to deal with him every week down here. Man they are a class act. They are the best in the region and one of the best crate drivers in the country. His results speak for that. It’s a true blessing to be able to come out here and run with these guys. I told my guys at the beginning of the week I wasn’t sure if I was even going to run it. We’ve been having some brake issues and bad luck. I told them mid-week we were going to try it and the ultimate goal is to get in the show. To stand on the frontstretch with the type of drivers that finished behind us makes it feel good. We have a very small budget, old car and shocks with a used motor. I can’t thank my family, crew, and sponsors enough.”

Waters, the 2016 Sweeney Tour Champion and last year’s runner-up, was fourth for his best “Battle of the Bay” finish. The most important battle on the speedway was the intense action with Whaley, Robinson, Blair, and Sandercock. As Whaley was sliding back, Robinson was trying to keep Blair behind him in the chase for the “Battle of the Bay” title, while Canadian Charlie Sandercock was running the highline moving forward. Robinson, Blair, and Sandercock would all pass Whaley, but Robinson was unable to fend off Blair and the charging Sandercock in the final laps, which cost Robinson the title.

After starting 10th, Blair was fifth giving him all four top five finishes. Sandercock went 17th to sixth to earn the $100 Precise Racing Products “Pedal Down” Hard Charger gift card as he really turned around his night after having to start ninth in his heat due to being light at the scales. Robinson and Whaley faded to seventh and eighth at the finish. Brady Wonderling was ninth ahead of track regular, Levi Crowl, who made his first ever Tour start.

Scott Gunn ended the night and the “Battle of the Bay” victorious leading all 10 laps of the non-qualifier. Gunn got behind the eight-ball after being light at the scales following qualifying putting himself behind all night. Gunn did rally from eighth to third in the first last chance B main earning him the pole position for the non-qualifier. The West Mifflin, Pa. driver earned $175 in his West Mifflin Collision #14G as became the 30th different winner in 34 races run all-time. Mike Franklin was second, who ironically was light after finishing fourth in his heat. J.J. Mazur, Ronnie Martin, Jr., and Christian Schneider completed the top five.

The Sweeney Tour will now be off for one month and will resume action with a two-night weekend on May 19-20 with Saturday night at Stateline Speedway in Busti, NY for just the second time ever and Sunday night at Eriez Speedway in Eriez, Pa. Both “Marquee” events will pay $2,000 to-win.