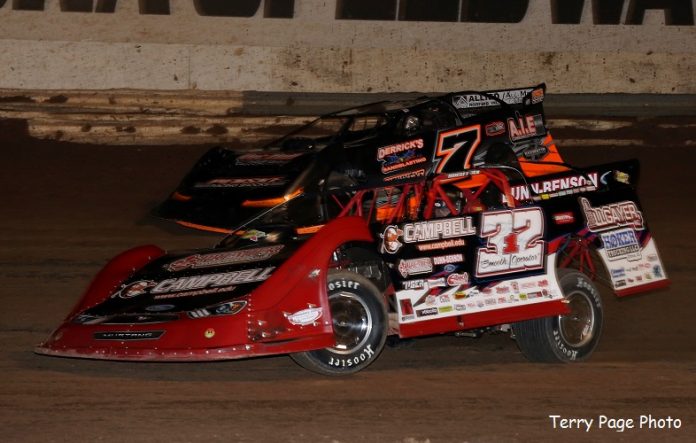 GRANITE CITY, IL – Bobby Pierce scored his first Lucas Oil Late Model Dirt Series win of the season on Friday night at Tri-City Speedway. The 21-year-old returned to his home state for the first time this season and led all 50 laps on his way to win the RockAuto.com Busch 50 – presented by Campbell University. Pierce withstood a late-race challenge from Tim McCreadie to become the eighth different winner on the tour in 2018. McCreadie finished in second, followed by Jimmy Owens, Kyle Bronson, and Brian Shirley.
Pierce’s win came just one week after the Dunn Benson Motorsports patriarch and car owner, Carlton Lamm passed away. Joined by his team and family, an emotional victory lane took place after claiming his sixth career LOLMDS win.
After tonight’s win, Pierce moves to sixth in the championship standings on his first full-year on the LOLMDS tour. “When you race on the Lucas Oil Series, these guys are the best there is. I really wanted to get that win for Big C. I know he’s up there watching. Just a big thanks to everyone, especially my crew they have worked so hard. It’s been a week to 10 days. Thanks for my sponsors for sticking with me, and thanks to all the fans for coming out tonight.”
Pierce dominated most of the race, which saw only one caution flag in the early stages. Over the last half of the race, Pierce battle fiercely with lapped traffic, which allowed several drivers to close the gap on him. Bronson took a shot at the top groove but lost two spots as McCreadie and Owens moved by him. McCreadie then closed in on Pierce, but could not get by as Pierce held his groove on the bottom of the track. McCreadie had one last chance heading to the checkered flag as Pierce drifted up ever so slightly coming off of turn four, but Pierce had enough momentum to take the win.
“It seems like that was the longest race I have ever run,” said the winner afterwards. “I kind of wanted a caution towards the end to clear out the track. I didn’t think anyone would have a chance to pass me on the outside. My experience here at this track was crucial; sometimes it all comes down to qualifying. That’s where a lot of races are won or lost. After hot laps I was a little bit worried. I went out there and qualified by setting fast time. Starting up front was better than starting in the second row.”
McCreadie’s Sweeteners Plus, Longhorn recorded its best series finish of the year as he continues to make gains in the championship point standings. “We have had a really good car lately. I tried to make the cushion work early on, but it was going away quickly. I wish I had gotten to second about ten laps earlier, and then I think I would have had a better shot at him [Pierce].”
Jimmy Owens’ Ramirez Motorsports, E3 Spark Plugs, Rocket took a podium finish coming home in third place. “Our car wouldn’t fire early on, but after that one caution it seemed to go a lot better. We got up to third and pretty much rode it out from there. We had some tough luck last weekend, but it feels good to get a good finish tonight,” said the three-time series champion.
The winner’s Dunn-Benson Ford Motorsports, Rocket has a Pro Power Racing Engine and is sponsored by: Campbell University, Allgayer Inc, Hoker Trucking, Premier Waste Services, Berger’s Marina, Sunoco, and Advanced Racing Suspensions.
Completing the top ten were Jonathan Davenport, Darrell Lanigan, Chris Simpson, Don O’Neal, and Billy Drake.
Lucas Oil Late Model Dirt Series
Race Summary
Friday, April 27th, 2018
RockAuto.com Busch 50 – presented by Campbell University
Tri-City Speedway – Granite City, IL