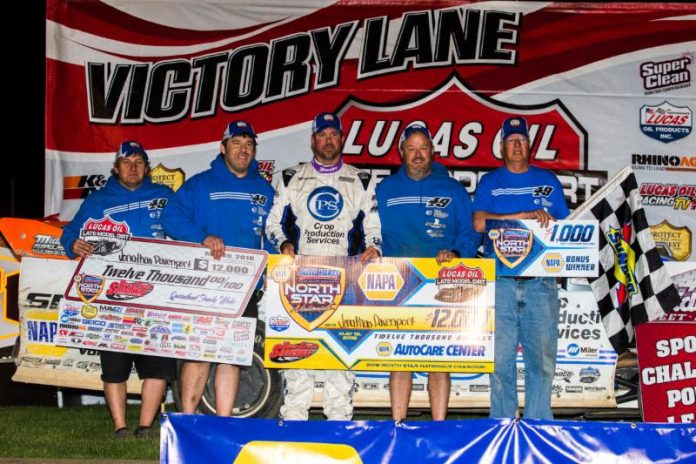 Pierce settled for a runner-up finish for the second consecutive night, just 0.281 seconds behind the race winner. Chad Simpson finished in third, with Don O’Neal and Scott Bloomquist rounding out the top five.

Jimmy Mars bolted to the lead at the start of the main event and led the first 20 laps of the race. A torrid battle between the top four drivers then ensued, with Simpson taking the point on lap 21. Simpson then led until Davenport put himself atop the scoring pylon as the new leader on lap 32.

Pierce began to make his late-race surge, taking over the second position and chasing down Davenport in heavy lapped traffic. Heading into turn four on the final lap Pierce threw a slide job in front of Davenport to momentarily take over the lead. As the two raced down the main straightaway to the checkers, Davenport powered his car to the inside of Pierce and beat the youngster to the finish by just a few inches.

In addition to his $12,000 first place prize money, Davenport pocketed an $1,000 bonus from NAPA Auto Part. In Lucas Oil Victory Lane, Davenport commented: “First off, thanks to Chad [Simpson], Jimmy [Mars] and Bobby [Pierce] for racing hard and clean out there. That was an awesome race. I knew he [Pierce] was coming for me at the end. The lapped cars were holding us up bad.”


“I felt like we had a little better car than to make it that close at the end,” Davenport added. “I was just trying to hit my marks out there. I went down the back straightaway and I saw my spotter and I knew the slider was coming. I made sure I entered the corner a little softer so that way I could turn back to the inside of him [Pierce]. I saw him out of the corner of my eye, so I knew he was there. I was just hoping I could make it back to the line and not spin the tires. What a great night, this was a turnaround from last night. Thanks to the track crew for a great track tonight and thanks for the fans for coming out.”

Pierce was still breathless after nearing pulling off the last-lap-last corner win. “Hats off the JD, he ran a heck of a race, he is one of the best on top. It was really great racing and a lot of fun. I only made one mistake out there tonight. I wanted to slide up earlier because he gave me some room. This track is just great. I can’t wait to come back here.”

Chad Simpson was looking for his second-career Lucas Oil victory. “I knew I was in trouble when that caution came out. You know anytime you can run like that against these guys, you have to feel good about yourself. Hats off to the Queensland Family and everybody associated with the track. We always enjoy coming up here to race. It was disappointing when this show was rained out last year. I have a lot of fans over there in turn four. It’s good to come up here and put on a good show for them.”