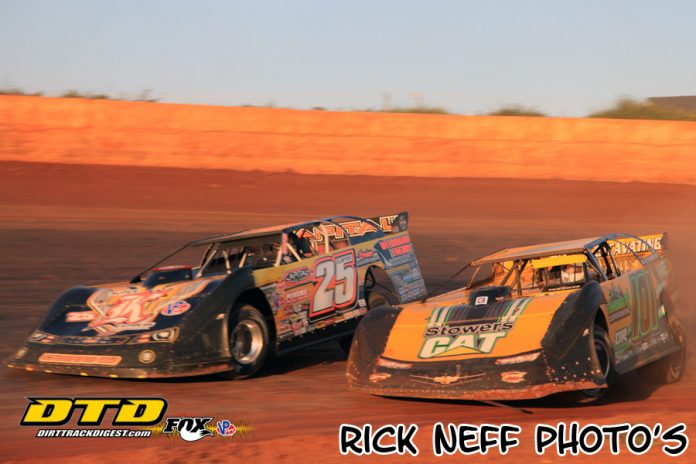 CONCORD, NC – The World of Outlaws Craftsman® Late Model Series kicks off the month of June in Tennessee for two thrilling 50-lap $10,000-to-win feature events. The Series’ final stop in the Volunteer State this season will begin on June 1 at Seymour, Tennessee’s 411 Motor Speedway and will conclude in Bulls Gap, TN at Volunteer Speedway on June 2.

As part of the Series’ 30th commemorative anniversary season, the Outlaws will invade new territory with its first-ever stop at Tennessee’s oldest dirt track, 411 Motor Speedway, on Friday, June 1. There’s sure to be no shortage of fender-banging racing at Tennessee’s Action Track as the best drivers in the world, wheeling the fastest late models on the planet, hit the 3/8-mile high-banked dirt track.

The following day, the Series will travel one hour northeast from the historic facility in Seymour, TN to Volunteer Speedway in Bulls Gap. Making its return for the first time in more than a decade, the World of Outlaws are eager to hit the track at the 4/10-mile high-banked speed plant on Saturday, June 2.

Clanton is still searching for his first win of the 2018 season, but his consistency night-in and night-out has been unwavering. He has collected five top-five and nine top-10 finishes of 10 races so far this season. The veteran driver of Zebulon, GA currently sits tied for third with defending Champion Brandon Sheppard in one of the World of Outlaws’ closest point battles ever. Only 52 points separate the top four drivers on tour, which means one night of bad luck scrambles everything.


Sitting second in points, and only 26 points behind Madden, is Tennessee-native Mike Marlar. The Winfield Warrior joins the World of Outlaws as a full-time driver for the first time in 2018 but proves to be a top contender for the championship title. Marlar recently claimed his first win of the 2018 season (Cherokee Speedway, May 4) but is looking forward to traveling back to his home state in hopes of having an edge on the competition

“I’m a little bit unique in the fact that even though I live in Tennessee, I’ve raced up at tracks in Illinois more than I have ever raced at 411 or Volunteer,” said Marlar. “I’ve always migrated towards the Midwest and have had a lot of fun racing out there. I will say I’ve won quite a few races at Volunteer Speedway throughout the years though. I’ve only been to 411 a few times and actually won a Modified race there just last season.”

Other drivers that will be entering the competition during the Series’ final swing through Tennessee include 2011 Champion Rick Eckert, 2017 Rookie of the Year Devin Moran, 2015 Rookie of the Year Brandon Overton, and more. For a complete list of World of Outlaws drivers visit woolms.com/drivers.