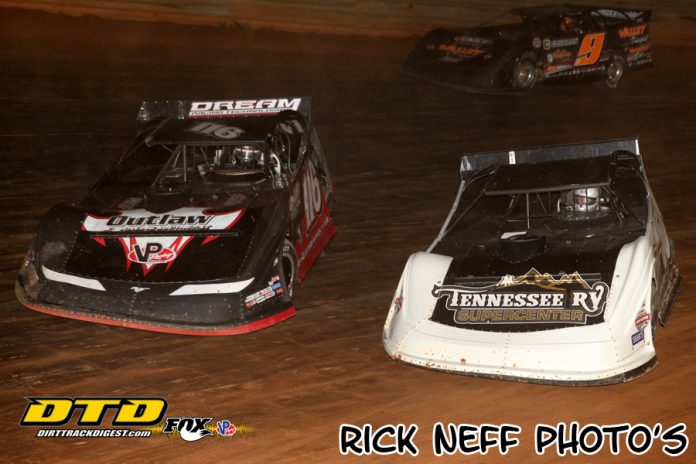 CONCORD, NC – The World of Outlaws Craftsman® Late Model Series and DIRTcar Racing Summer Nationals stars get set to collide for two thrilling shootouts to cap off the month of June. The battle between the best Late Model drivers in the country begins at Terre Haute Action Track in Terre Haute, IN on June 29 and leads to Federated Auto Parts Raceway at I-55 in Pevely, MO on June 30.

Drivers on the DIRTcar Summer Nationals tour will compete in a total of 28 races in 32 days. Also known as The Hell Tour, this rigorous schedule is one of the most grueling in all of motorsports. The pair of events versus the World of Outlaws falls mid-season after a stretch of 14 races in 16 days.

The World of Outlaws Craftsman Late Model Series bunch will also be in the thick of their demanding schedule with 20 races completed out of a total 46 in the 2018 season. Drivers and crews will be pushed to their limits and only the strong will survive throughout the remainder of the season.

Not only is the competition heated on the track, the tension between drivers will surely spill over from night-to-night and the pair of DIRTcar Summer Nationals versus World of Outlaws events could be the ultimate tipping point for some.

The 2017 edition of the two tours at Federated Auto Parts Raceway at I-55 in Pevely, MO was one of the most dramatic and thrilling races of the season as a single mistake on lap 43 took out all but one car in the top-five in the 50-lap feature event.

Brandon Sheppard was leading a tight battle for second between Brian Shirley and Chris Madden with Tyler Erb and Frank Heckenast trailing closely behind. Multiple slide jobs were exchanged and the drivers were battling three-and-four-wide around every inch of the third-mile high-banked dirt oval.

With only seven laps remaining in the 50-lap feature event, Shirley gets into the back of Madden and the pair collects Erb and Heckenast in the process.

Shirley and Madden, who were running second and third at the time, both headed back to the pits after the collision on track. On Shirley’s way to the pits, a former crew guy of Madden’s chucked his signal stick at Shirley’s car displaying his frustration with the way things unfolded.

Eckert who finished third in the feature and had a front row seat to the heated battled said, “That wreck happened about 15 times, it just finally did happen. I lost a couple of spots trying to miss it the times that it didn’t happen but it was a gift to us because we were backing through the field there. I kept getting off of that top because I thought they were crashing and finally they did and I was lucky enough to be far enough away from it.”

Madden is currently leading the World of Outlaws Craftsman Late Model Series points and Shirley will be joining DIRTcar Summer Nationals action. While the pair hasn’t had any recent quarrels, there’s no telling what will happen or who will trigger a new feud as competition and tensions heat up this June.

Tickets for the World of Outlaws Craftsman Late Model Series events versus the DIRTcar Racing Summer Nationals at Terre Haute Action Track on June 29 and Federated Auto Parts Raceway at I-55 on June 30 will be available to purchase on the day of the event at the track ticket booth.