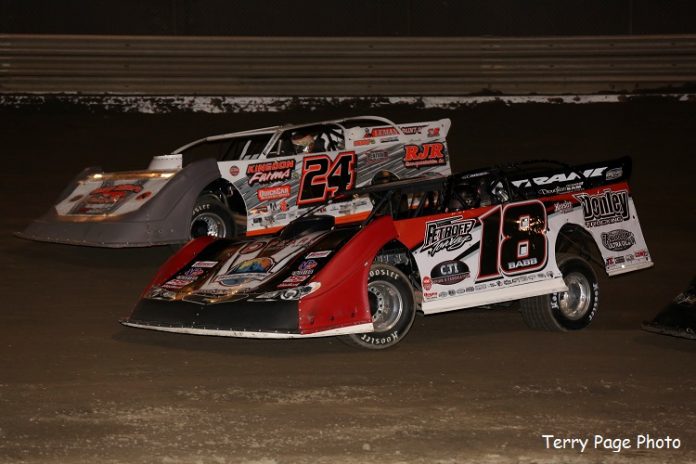 MAPLE PARK, IL – Shannon Babb of Moweaqua, IL, out dueled Billy Moyer of Batesville, Ark., for the second consecutive night — this time in a down-to-the-wire thriller — to score a $10,000 victory in Friday’s 55-lap DIRTcar Summer Nationals feature at Sycamore Speedway. Moyer grabbed the lead from Babb on lap two and set the pace until the final six circuits, when the two longtime rivals swapped the top spot five times before Babb made his decisive pass on lap 54. Babb would go on to see the checkered flag in front of a packed house at Sycamore Speedway.

“It’s all fun and games when its like this,” commented Babb after the night’s event. “I was going to be content with 2nd place. I thought thats were we were going to end up and I was fine with that. It got to be 12 laps to go and I could see we were approaching lap cars and knew something was going to change. I wasn’t sure what the outcome was going to be.”

Following Babb and Moyer to the checked flag was tour regular Ryan Unzicker with his strongest finish in the first 3 nights of competition. Devin Gilpin of North Vernon, IN finished in the 4th position making his way up from the 14th starting spot in the Jim Beeman owned 1G.

Pole sitter Brian Shirley rounded out the top 5. Shirley now finds himself in the points lead ahead of the dueling calls of Moyer and Babb.