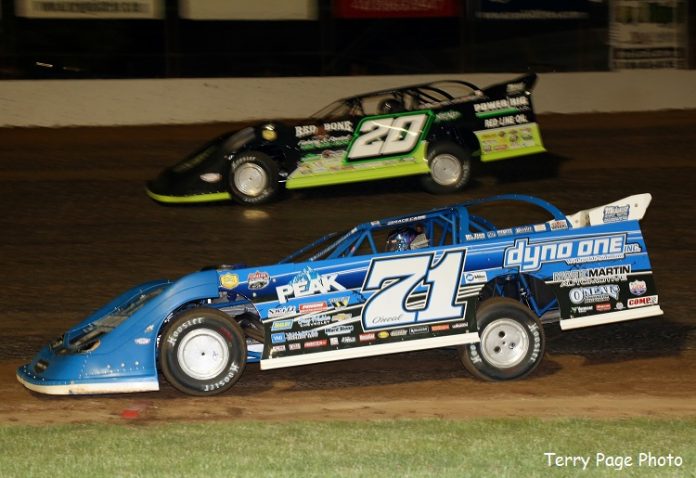 COLUMBUS, MS – Hudson O’Neal took the lead from defending Lucas Oil Late Model Dirt Series National Champion, Josh Richards with seven laps to go and held off a hard-charging Bobby Pierce to score the $20,000 victory in the Country Pleasin’ “Clash at the Mag” at Magnolia Motor Speedway.
The 17-year-old, third generation driver battled amongst the top five for most of the race before beginning his charge to the front. O’Neal moved around Tim McCreadie to take second and then tracked down race-leader Josh Richards, who had been in control for much of the race. O’Neal dove to the inside of Richards coming off of turn with seven circuits remaining to take the top spot. He then had to contend with Pierce, who had pitted earlier in the race and charged all the way through the field to give O’Neal a challenge in the closing laps.
Pierce finished in second with Josh Richards, Scott Bloomquist and Tim McCreadie completing the top ten.
In earning his first-career Lucas Oil Late Model Dirt Series victory, O’Neal, son of former series champion Don O’Neal (who finished seventh in the race), received several congratulatory wishes from his father, his crew, and other competitors as he gave an emotional victory lane speech.
“I can’t believe it,” said the driver who had posted seven consecutive top ten finishes in LOLMDS competition before making only his second-career start at Magnolia. “I just saved my stuff there early on. That was a great race. I just wanted to keep the tires under me and not abuse them. I stayed down there on the bottom where there was enough moisture to catch Josh.”
“Josh and I had a good battle there for a few laps. He raced me clean and I can’t thank him enough. I hope the fans who watched this enjoyed it, because I sure did. I have to thank my car owners Todd and Vickie Burns, my crew chief Taylon Center and the entire team. Both Josh and Bobby ran a great race, it was a lot of fun.”
Pierce, who pitted around lap 20 charged to a runner-up finish. “I thought I had a shot on the last lap. There was a lapped car there, I drove around the outside, but came up just short. I banged the wall a few times. I hope I didn’t mess up anything on the car. Congrats to Hud on the win. That was so cool to see him win,” said the driver of the Dunn-Benson Ford, Campbell University, Rocket.
Richards, who led several laps during the 100-lap event was looking for his first LOLMDS since February. “When Timmy [McCreadie] got into me a little bit I think it cut my tire. I was hanging on and here comes Hudson on the bottom. I am happy for him to get the win. He’s a good kid,” said the driver of the Best Performance Motorsports, Colt Firearms, Rocket.
The winner’s Club 29 Race Cars entry is powered by a Clements Racing Engine and sponsored by: Dyno One, Peak Antifreeze and Coolant, Sub Surface of Indiana, Mark Martin Automotive, O’Neal’s Salvage and Recycling, Burns Farms and Tarpy Trucking.
Completing the top ten were Earl Pearson Jr., Don O’Neal, Jonathan Davenport, Mason Zeigler and Spencer Hughes.
Lucas Oil Late Model Dirt Series
Race Summary
Saturday, June 16th, 2018
Clash at the Mag
Magnolia Motor Speedway – Columbus, MS