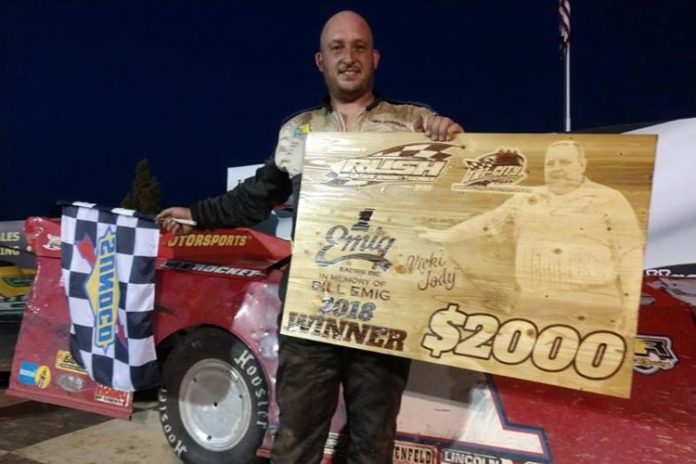 FRANKLIN, PA – The Sweeney Chevrolet Buick GMC RUSH Racing Series powered by Pace Performance had a doubleheader on Sunday evening at Tri-City Raceway Park for the annual “Bill Emig Memorial”. The Sweeney Late Model Touring Series made its first of two appearances in race #7 of the 2018 season, while the RUSH Sprint Cars were also making their first of two Bonnell’s Rod Shop Weekly Series appearances as Brady Wonderling (Late Models) and Arnie Kent (Sprints) were victorious. Tri-City owner Mark Tatalovic put down a new surface in both turns since the last race at the track and received rave reviews from the racers.

One year after his brother Jeremy won the “Bill Emig Memorial” at Tri-City, Brady Wonderling put on a dominating performance on Sunday night setting fast time in $100 FK Rod Ends “Shock the Clock” qualifying, winning his FK Rod Ends heat race, and leading all 30 laps of the feature to capture his first career Sweeney Late Model Touring Series victory. All told, Wonderling earned $2,125 for the night plus received a beautiful wooden, laser etched award as he became the fourth new Touring Series winner in seven races this season! The Wonderlings are now the first brother tandem to win the “Bill Emig Memorial” in the long history of the event dating back to the early 1990s in various Modified classes!

“What a nice race track,” expressed the 42-year-old Scio, NY driver. “If we could race on stuff like this all the time it would be awesome. It means something to win any race, but to win something special like this is really cool. I can hang this (wooden award) in my restaurant like the one my brother got so the whole public can see this. We’ve been working on getting this car better. I have to thank TBR (Team Blair Racing); they’ve really helped us and got us going along with Ryan and Randy Ralyea- they own this thing. I couldn’t ask for anything better to drive.”

Brady Wonderling powered around dash winner, Jason Genco, on the outside to race to the early with Genco settling into second over Adam Ferri and brothers Jason and Brian Knowles. The top three of Wonderling, Genco, and Ferri quickly began to pull away on lap three before a caution for Paul Norman, who spun in turn four.

When racing resumed, Ferri passed Genco for second. Genco slid back another spot when Jason Knowles went by for third on lap five; however, Knowles missed his mark on lap six allowing Genco to get back by, while Jeremy Wonderling moved into the top five. Meanwhile back up front, Brady Wonderling and Ferri began to distance themselves from the field on lap seven. Two laps later, Jeremy Wonderling grabbed fourth from the #4 of Jason Knowles on lap nine. Knowles then lost the handle spinning out of the fifth position with Colby Beighey also involved with 13 laps completed.

The next 16 laps would go caution free until Tony White slowed to bring out the caution on the final lap setting up a one-lap shootout to the finish. Brady Wonderling chose the bottom for the double file restart and took off, while Ferri didn’t get a good restart as Genco, Jeremy Wonderling, and J.J. Mazur snuck by.

At the finish, Brady Wonderling crossed first by a margin of 0.465 of a second in the Randy Ralyea-owned #z1. Wonderling became the 33rd driver in the history of the Series to win a Sweeney Tour event. In his first season of Touring, Wonderling now moves into third place in points with his fourth straight top nine finish including two top two finishes in the last three races.

Genco, who is also in his first year of Touring, is showing he’s primed for a title run. Genco crossed the finish in second for his third straight top four finish, which includes his first career Tour win on June 2 at Genesee. Genco earned $1,000 for runner-up, $100 for winning the “John Buzzard Memorial” Dash and $25 for winning the second FK Rod Ends heat race bringing his night’s winnings to $1,125 for the J.P. Craig/Jason Badgley #29J team.

Jeremy Wonderling was able to maintain his points lead with his third place finish after starting sixth as he rebounded from a surprisingly poor 12th place qualifying effort. Despite not winning a feature yet this season, Wonderling has rattled off three podium finishes in his last four races and hasn’t finished worse than 12th all season.

Last Sunday at Eriez, Mazur recorded his season’s first top 10 in ninth and improved on that Sunday at Tri-City with a fourth place finish after starting eighth. After running second for 25 laps, Ferri faded to a disappointing fifth at the finish nonetheless was able to beat his prior career best Tour finish of ninth from two races ago at Genesee.

In his first Tour start of the season and just second of his career, Colby Beighey had a solid night. Beighey qualified second fastest. After getting caught up in Jason Knowles’ spin, Beighey came back from the tail to finish sixth. For the second straight race, Chad Sines was the Precise Racing Products “Pedal Down” Hard Charger. Sines went 12th to seventh to earn another $100 gift card. “Futures Cup” racers Kyle Murray and Cory Lawler were eighth and ninth. It was Lawler’s third straight top 10 finish. Veteran Sweeney Touring Series regular, Brian Knowles, made his first Tour start of the season and was 10th.

During qualifying, Cory Sines got too and went sliding into the turn two barrels as the damage received ended his night. Sines was awarded the TBM Brakes “Tough Brake of the Night” recipient. Jason Knowles was selected as the Dirt Defender “Defensive Drive of the Night” recipient after holding off Jeremy Wonderling during his heat race to qualify for the dash.

Despite being the last race of the night, the RUSH Sprint Cars put on a tremendous show for the fans as Arnie Kent held off fifth starting Chad Ruhlman to capture his second Bonnell’s Rod Shop Weekly Series victory of the season. Kent also denied Ruhlman of his fourth straight win in his fourth start of the season.

“This means a lot to win this race,” stated the 53-year-old New Castle, Pa. Sprint Car veteran. “I grew up around Bill Emig’s race cars when I was young so to win this in his memory and to have my dad here with me on Father’s Day is pretty special. That was a lot of fun out there. The track was great and as slick as it was I don’t think the 410s (Sprints) would have been much faster or better racing. I knew Chad (Ruhlman) was coming and knew he’d have to make quite a move on the outside to get by me.”

Kent started on the pole and led the opening lap, but it was Brandon Hawkins making the pass for the lead on lap two. Ruhlman was up to fourth on lap three then passed Zach Morrow for the third one lap later with sixth starting Gale Ruth, Jr. sliding into fourth. On lap six, Kent regained the lead, which would turn out to be the winning pass. Ruhlman started putting pressure on Hawkins on lap eight and the two ran side-by-side over the next three laps with Ruhlman finally getting by on lap 10. Kent had a half-straightaway lead with five to go, but Ruhlman got the caution he needed when points leader Ruth got into Hawkins sending both spinning in the battle for third.

The final five laps saw Ruhlman all over Kent, but Kent hit his marks as he took the $500 victory by 0.212 of a second in his Equipment Rental Options-sponsored #18. Morrow, who won a go-kart race in 2011 on the old infield track at Tri-City, was third for his fourth top five of the season. Dave Hawkins worked his way from seventh to fourth matching his season’s best finish, while Dalton Daniels completed the top five. Ruhlman and Ruth won the heat races.

The Sweeney Late Model Tour will be off until Tuesday, July 3 for the first ever event at Weedsport (NY) Speedway that will be televised by MAVTV/Speed Sport. The $2,000 to-win Marquee Event will be race #8 of the 2018 season. The Sprint Cars will be in action on Wednesday night (June 20) at Lernerville Speedway for the second of five “Wednesday Night Lightning” events.