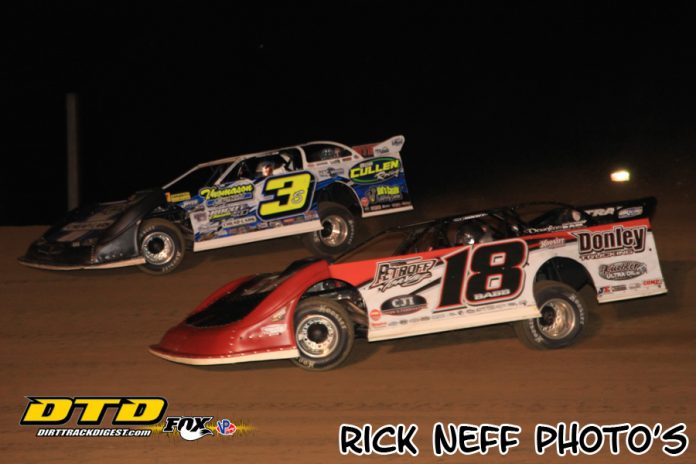 CONCORD, NC – Legends Week had it’s mixture of adversity both on the track and from the skies as rain hampered 3 out of 6 nights of racing on the 2018 Summer Nationals 2nd week of action. The rained our event at Spoon River Speedway (IL) was eventually able to run on Monday June 25 after it’s original June 21 date was lost to rain, but the events at Belle-Clair and Jacksonville Speedway were canceled due to thundershowers and sustained periods of heavy showers.

However, the weather didn’t effect the on track drama that was the remainder of Legends Week presented by DirtonDirt.com. The week saw week 1 standouts Shannon Babb and Billy Moyer continue their strong presence while marching towards 100 career Summer Nationals wins. The week also saw a major win by longtime tour regular Ryan Unzicker at Tri-City Speedway (IL).

The week’s first event not to be hampered by rain was the $10,000 to win June 22 event at Tri-City Speedway (IL). The track was lightening fast due to rain throughout the week and saw strong runs by series regulars as well as the return of 2017 tour champion Bobby Pierce. In the end it was El Paso, IL driver Ryan Unzicker who survived the attrition heavy race to pick up his first tour win of 2018. Piece would charge from the 19th starting position to run 2nd while series points leader Shannon Babb would come from 22 to 4th.

The stop at Fairbury American Legion Speedway the following night would see Billy Moyer inch closer to 100 wins with Summer Nationals victory 98 over Brian Shirley. Moyer inherited the lead after Bobby Pierce was forced to pull in with cooling issues while leading. Once again Shannon Babb was able to score another top 5 with a 3rd place finish.

In an event at Tri-State Speedway (IN) that saw heat racing pushed aside to get in the completed Shannon Babb would once again find his way to victory lane for his 96th career Summer Nationals win. Babb would fend off New Waverly, TX driver Tyler Erb who made his first Summer Nationals start of 2018. Billy Moyer climbed from the 9th starting spot to a podium finish with 3rd.

The final event of Legends Week was a make-up date at Spoon River Speedway (IL). Points leader Shannon Babb scored the victory brining his total career wins up to 97. Babb also locked up a victory in the Legends Week section of the 2018 tour courtesy of DirtonDirt.com. Brain Shirley finished 2nd with Tyler Erb bringing home his 2nd top 3 in two nights.

Looking ahead at Challenge week presented by Algaier Shocks and Midwest Speed Expo the tour regulars of The Summer Nationals will be taking on the World of Outlaws Craftman Late Model Series travelers in a two night showdown at The Terre Haute Action Track (IN) on June 29 and Federated Auto Parts Raceway at I-55 (MO) in June 30. Last year the event at Federated Auto Parts Raceway resulted in an all out brawl for the top 4 positions in the closing laps which saw a series of slide jobs take out several top running competitors. The stakes will be high on both sides as the two groups of drivers race for bragging rights and midwest supremacy.

Challenge Week begins June 28th at LaSalle Speedway (IL). Visit thehelltour.com/schedule to view the entire 2018 tour schedule. Follow @Summernationals on Twitter and Facebook for updates during and between race seasons.