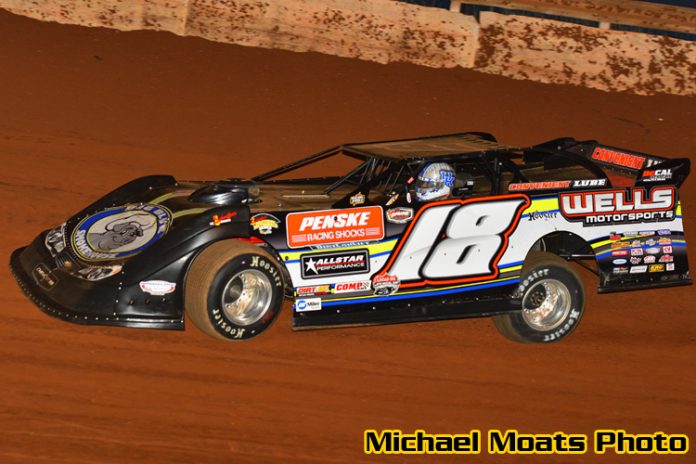 TAZEWELL, TN – The Schaeffer’s Oil Southern Nationals Bonus Series presented by Sunoco Race Fuels and Tennessee RV and the Schaeffer’s Oil Iron-Man Championship Late Model Series presented by DirtonDirt.com would co-sanction the Firecracker 40 at Tazewell Speedway in Tazewell, Tenn. on Tuesday evening and Eric Wells of Hazard, Ky. would be victorious and earn himself $5,000 for his efforts. The Brucebilt Performance Iron-Man Modified Series would also be in competition at “The Bad Fast Taz” and Ricky Arms of Moss, Tenn. would see the checkered flag first and score a $1,000 victory.

Outside front-row starter Dakotah Knuckles would jump to the lead at the start of the Firecracker 40 event, with Brian Smith, Chad Ogle, Eric Wells, and Aaron Ridley giving chase. Knuckles would set a torrid pace out front and would begin the process of lapping slower traffic on lap seven, while Ridley and Wells would battle for the fourth position. By lap ten, Knuckles would have almost a full straightaway advantage over the field, while Ridley got by Wells for the fourth position, only to have Wells reclaim the position three circuits later on lap thirteen. Knuckles advantage out front would quickly disappear on lap fourteen when his machine started showing puffs of smoke and the first caution of the event waved on lap sixteen when Ridley would slow on the frontchute and pull into the work area and would return to action. Under the caution, race leader Knuckles would pull to the work area and would be done for event as the result of an oil-line that came loose. This would put Smith in the lead of the race and the restart would see Wells work past Ogle for the runner-up spot and immediately set his sights on Smith and would pass him on lap eighteen, but a caution for a three-car tangle on the frontchute that involved Ogle, fifth-place running Chicky Barton, and sixth-place running Jeff Neubert would negate the pass, as Ogle would be the only driver not able to continue as his mount suffered a broken rear-end. The restart would also see the caution wave for what would be the final time when Ridley again slowed on the track and would be pushed to work area, finished for the night. The final restart would see Wells immediately begin to pressure Smith for the lead and Wells would grab the first position on lap twenty. Wells would open up a comfortable advantage by lap twenty-five and would begin working slower traffic on lap twenty-seven. Meanwhile, sixteenth-place starter David Payne had charged his way to the front and would battle with Smith for second, while Barton had recovered from his incident a few laps earlier and would take fourth from Clyde Overholt on lap twenty-eight. Wells would not be challenged the remainder of the way in the event and would cross under the checkered flag first, while Smith would finish second, with Payne completing the podium finishers with a third-place effort. Barton and Overholt would complete the top five. The remainder of the top ten finishers would be thirteenth starting Matt Tharp, Neubert, fourteenth starting Joey Standridge, Mitchell Childress, and Mitchell Burke.

The Modified feature event would see top qualifier Chase King jump to the early advantage and hold the top spot until lap nine when Ricky Arms would drive past King for the race lead and never be seriously challenged the remainder of the way in the twenty-lap contest to claim the victory. King would settle for runner-up honors, while first-time visitor Clayton Miller would drive to a third-place finish. Shane Roberts would finish in the fourth position, while Amos Bunch would make a late-race pass to claim the fifth position. The remainder of the top ten at the conclusion of the event would be Wayne James, Jody Horton, Jimmy Payne, Tyler James, and Terry James.