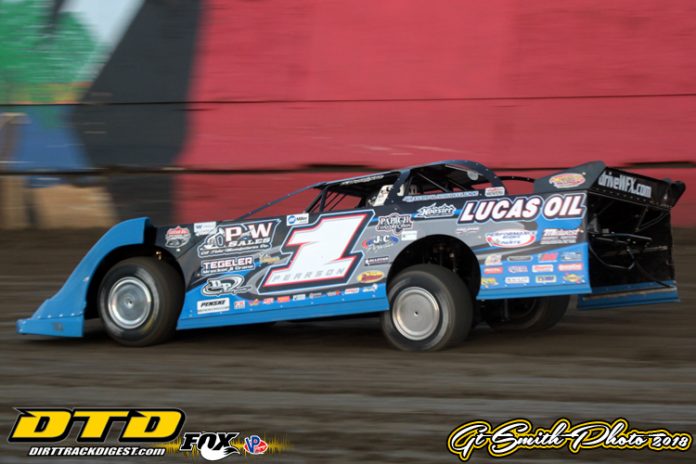 GRANITE CITY, IL – Earl Pearson Jr. bolted from his ninth starting spot to win Friday night’s NAPA Know How 50 at Tri-City Speedway. Pearson took the lead on lap 37 from Jimmy Owens and went on to his third Lucas Oil Late Model Dirt Series win of the season. Owens finished in second with Tim McCreadie coming home in third. Completing the top five were Mason Zeigler and Bobby Pierce.
Tony Jackson Jr. grabbed the lead at the start of the main event and led the first 32 circuits before Owens forged. Pearson quickly began to pressure Owens for the top spot and was able to gain the advantage with 13 laps to go.
“Jimmy [Owens] was awful good tonight. I watched him in the heat race and knew he would be hard to beat tonight. I just married myself to the bottom,” said the 46-year-old Pearson in Lucas Oil Victory Lane. “He [Owens] slipped up just a little bit down there in the corner and I held my line around the bottom. Thanks to my crew: J.C. Wright, Garrett Alberson, and Marshall Hooter, they all did a great job tonight.”
“I told Kevin Gundaker on the stage during driver’s introductions that a hurricane was about to blow into Tri-City tonight so watch out. They had a little ring around the bottom and I just stayed there. The track was in great shape tonight. You could run anywhere on the track. Hats off to Kevin and his entire track crew. I know the fans saw a terrific race.”
Owens, who led four laps during the race, was pleased with his runner-up finish as he congratulated his good friend in Victory Lane. “Thanks to Leon Ramirez of Ramirez Motorsports, my crew, and all of my sponsors and especially to that number one car that won the race. I hope the fans enjoyed that race.”
McCreadie finished third despite smoke from the car in the final laps. “I really didn’t see the smoke, I nursed it to the end. I don’t know what damage there is in the motor. We have to quit digging ourselves a hole at the start of the night. The car was really good over the last half of the race tonight. I just need a little more off of the corners to run with these guys. We will keep on working on this Longhorn Chassis to make it better.”
Pearson’s 35th career LOLMDS win came aboard the Ronnie and Terri Stuckey-owned, Black Diamond Chassis which is powered by a Clements Racing Engine and sponsored by: Lucas Oil Products, P&W Sales, Tegeler Wrecker and Crane, David Petersen Motorsports, Midwest Sheet Metal, Rauen Precision and Machining, Papich Construction, Sunoco Race Fuels, DriveWFX.com, 5-Star Shop Service, and Cooper’s Country Meat Packers.
Completing the top ten were Josh Richards, Don O’Neal, Tony Jackson Jr., Jonathan Davenport, and Hudson O’Neal.
Lucas Oil Late Model Dirt Series
Race Summary
Friday, July 13, 2018
NAPA Know How 50
Tri-City Speedway – Granite City, IL