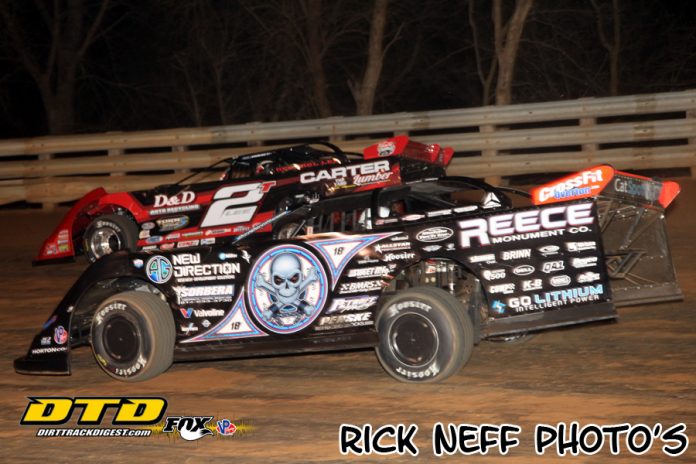 WHEATLAND, MO – Scott Bloomquist took the lead on lap 32 and then pulled away to his 600th career victory on Saturday night at Lucas Oil Speedway during the CMH Diamond Nationals. The Hall-of-Fame driver picked up his sixth Lucas Oil Late Model Dirt Series win of the season and his all-time series leading 92nd victory.
Jimmy Owens led the first 31 laps of the race as he looked to capitalize on his past Lucas Oil Speedway success. Bloomquist, who re-started third on the grid after a caution for debris, went around both Owens and Mason Zeigler for the lead which he stretched out over the final laps of the race.
Zeigler finished in second with Friday night’s winner at Tri-City Speedway, Earl Pearson Jr. earning another podium finish for the weekend by coming home in third. Will Vaught led the home-state contingent with a fourth-place finish and Owens rounded out the top five.
In Lucas Oil Victory Lane, Bloomquist stated that there were so many people to thank as he reached his milestone 600th career victory. “It seems like it’s been a few years since we got number 500 at Brownstown. It’s basically been me and Cody Mallory the last few years. We put in so many hours in the shop. It was a good race for the fans. They may have finally got the track to where it’s right up there with the best in the country. We are going to keep working hard and maybe we can get to 700 someday.”
Zeigler was pleased with his second podium finish of the month as the Pennsylvania driver maintained his lead in the rookie-of-the-year chase. “We keep knocking on the door for a win. I can’t thank my wife enough, she is pregnant and going up and down the road with us, and we enjoy it. I want to thank Brian and Buck. I want to than JLE Industries, without them I couldn’t run up and down the road.”
Pearson advanced from his fifth starting spot to finish third. “We got into traffic and it was good battle with Zeigler. I hope we put on a good show for the fans. I had some people here tonight from Jacksonville and I hope they enjoyed the show as well. Thanks to Ronnie and Terri Stuckey and all of my crew, it was another good points night.”
The winner’s Sweet-Bloomquist Chassis is powered by a Durham Racing Engine and sponsored by: CatSpot, New Direction AG, Sweet Manufacturing, Reece Monument Company, Sorbera Chiropractic, Penske Shocks, Valvoline, Crossfit by Overton, Petroff Towing, and Horton Coal.
Completing the top ten were Jonathan Davenport, Bobby Pierce, Logan Martin, Chad Simpson, and Hudson O’Neal.
Lucas Oil Late Model Dirt Series
Race Summary
Saturday, July 14, 2018
CMH Diamond Nationals
Lucas Oil Speedway – Wheatland, Mo.