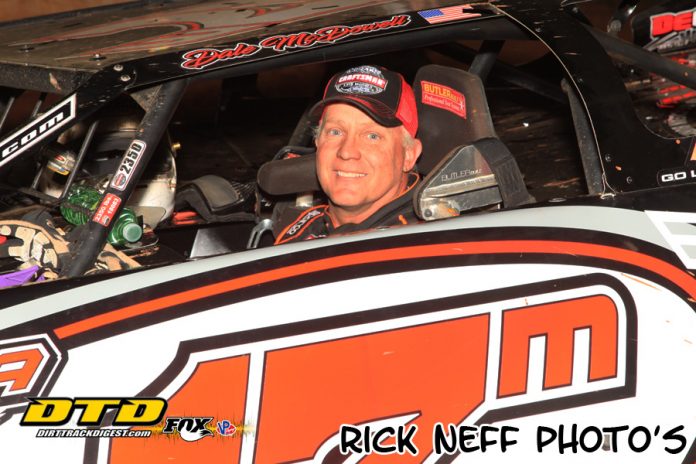 The Chickamauga, Ga. driver drove the Shane McDowell Racing entry to his third career series victory in front of a packed house and the $10,000 payday. McDowell’s Sweet-Bloomquist Race Car is sponsored by New Era Industrial, Textron Off Road, Will Kinzer Foundation for Autism Research, Cometic Gasket and Quality Natural Gas.

From the drop of the green flag McDowell would set a blistering pace over the 30-car field. He would lead the entire distance of the 53-lapper and go on to take victory over fourth starting Vic Hill, fifth starting Eric Wells, tenth starting Ross Bailes and 14th-starting Casey Roberts who rounded out the top-five at the finish.

Four caution flags slowed the race. The first yellow was on lap 14 as Joey Coulter would come to a stop at the top of turn two with mechanical problems. The second yellow flag would fly on lap 24 as Steve Casebolt spun in turn three and with his nosepiece underneath the race car was unable to continue. Casebolt was running sixth at the time. The third caution would fly on lap 43 as Dwayne Joyce would slow in turn two and the final yellow flag waved on the 50th lap as Shanon Buckingham slowed in turn four with a right-rear flat tire. Buckingham was running in the top five at the time of the flat tire and at one point in the race was running in the runner up slot. Buckingham’s crew went to work, changed the tire and he restarted in the 18th spot and finished one spot better.


The series moves to Volunteer Speedway in Bulls Gap, Tenn. on Monday Night July 16th paying $3,500-to-win at the McCarter Family promoted facility for Round Two of the 11-race journey.