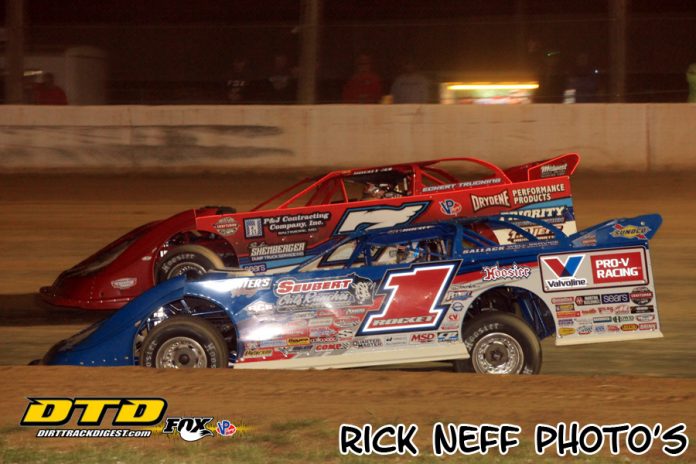 NEW RICHMOND, WI – The World of Outlaws Craftsman Late Model Series begins the month of August with a final stop in Wisconsin for the biggest payday of the season, August 2-4. For over three decades now the USA Nationals at Cedar Lake Speedway — located just across the Minnesota/Wisconsin state line, northeast of Minneapolis, MN in New Richmond, WI — has attracted the best dirt Late Model drivers in the country in hopes of grabbing the coveted eagle trophy and the $50,000 prize.

While the event has become a staple on the World of Outlaws schedule, a new format will shake things up this year.

Similar to years past, a full $6,000-to-win shootout will take place on Thursday, August 2. Hot laps will begin at 6:30 PM, followed by a complete showdown starting at 7:00 PM. The show will also feature USRA Limited Late Models and an after party in the Cedar Lake Arena.

On Friday, rather than qualifying against the clock, drivers will be placed into a pair of heat races. Drivers will register and draw a number at the World of Outlaws Command Center which will place them in the first set of heat races. The second set of heat races will use an inverted lineup based on the number drawn. For instance, if a driver draws a 10 for the first heat race, in the second heat race his draw will be scored as a 90.

Each set of five drivers in the same respective positions in the inverted draw list will then be shaken up to rearrange drivers against different competitors for the second set of heat races.


Passing points will be accumulated based on positions gained in the two heat races. The 16 drivers with the most passing points will be locked into the $50,000-to-win Sears Craftsman Feature. Furthermore, the top eight will transfer into the USA Nationals Dash to compete for starting spots in the top four rows.

On Saturday, an autograph session and a meet-and-greet with the drivers will kick off the final day of the 2018 USA Nationals. At 6:30PM all drivers will take the field for Hot Laps prior to the Last Chance Showdowns, giving non-qualifiers one last shot at entering into the 100-lap finale event. Further, Saturday’s show includes another full show of local Late Model racing.

As always, many fan-friendly events are on the docket for the total USA Nationals fan experience, including tubing down the Apple River all weekend. On Saturday, enjoy a free concert featuring Kip Mexico, a punk rock cover band widely known throughout the Twin Cities, lawn mower racing and a FansFund Luncheon.

Last year, during the 30th annual USA Nationals, Don O’Neal pocketed the $50,000 prize, while Chris Madden swept the preliminary night, turning the fastest lap on the track during qualifying, holding off charges from Scott Bloomquist during their heat race and defending the lead during the Feature from Frank Heckenast Jr., Billy Moyer and Brandon Sheppard. The crown jewel brought 42 Late Models to the Cedar Lake Speedway stage, all of whom were trying to claim a piece of a near $200,000 purse for the three-day show.

Tickets for the USA Nationals at Cedar Lake Speedway on Aug. 2-4 are available online. To read more about the schedule of events for the three-day USA Nationals head to cedarlakespeedway.com.