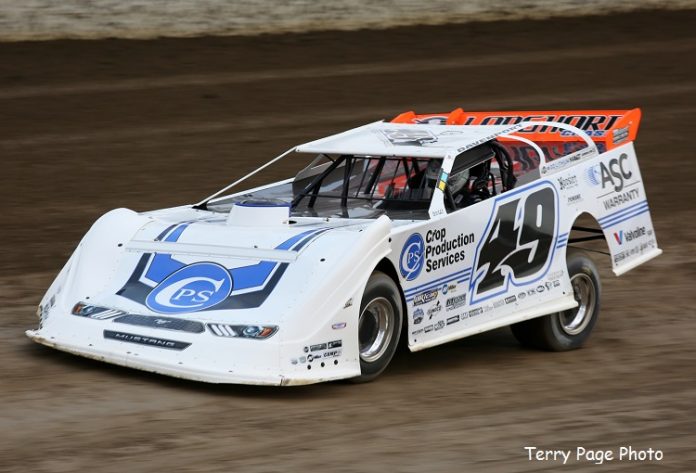 GREENWOOD, NE – In one of the closest finishes in series history, Jonathan Davenport edged out Scott Bloomquist by just 15 milliseconds to win his seventh Lucas Oil Late Model Dirt Series event of the season on Thursday night at I-80 Speedway.
Davenport took the lead from Bloomquist on lap 37 and stayed in front, with Bloomquist lurking closer and closer as the laps wound down. Davenport held off the final surge by Bloomquist at the line to win the Malvern Bank Go 50, and the five thousand $2 Dollar Bills that comes with the victory. Trailing Davenport and Bloomquist at the finish line were Brandon Sheppard, Chris Simpson, and Darrell Lanigan.
“Man, what a race! Scott had the best car tonight. I thought while me or Brandon were leading that [Bloomquist] was far gone. Before that caution came out my right rear started vibrating real bad. I was hoping that Brandon would pick the bottom and that meant I would be up top. I was just going to drive it up around that cushion. Sometimes you don’t have the best car, but we were able to get it done.”
“I could hear him under me on that final lap. I had a little issue in turn two and I had to get it straightened back out going into three. I have already given one away and I didn’t want to again. I just tried to ease into there a little more than I wanted to, and I got to far off of that corner. He has a pretty good car right now and for me to beat him really says a lot about my crew and how hard they have worked to get us back here [in Victory Lane].”
Bloomquist entered the event with two Lucas Oil Late Model Dirt Series wins in his last three starts. He congratulated Davenport in Victory Lane. “We were just lacking a little bit. We tried to move up and then we started to run him back down. Then on that last lap we went down low and almost got him at the finish.”
“We didn’t really need that caution. The car was so good before that. He [Davenport] fired off really good and again we made a run back at him. I thought we had him there for a moment.”
Sheppard led the first 16 laps of the race but came home in third. “We were good up top for a while and then I went down low a few times and then back up. We had a pretty good rhythm going. To get third against these guys is great, they are really tough to beat. We put it in the right position for a while, but we will come back to tomorrow and see what we can do to get a good-starting spot for Saturday night.”
The winner’s Lance Landers Motorsports, Longhorn Chassis is sponsored by: Crop Production Services, Spartan Mowers, Valvoline, ASC Warranty, Penske Shocks, Mega Plumbing of the Carolinas, Midwest Sheet Metal, Sunoco Race Fuels, and Hawkeye Trucks.
Completing the top ten were Hudson O’Neal, Jimmy Owens, Gregg Satterlee, Josh Richards, and Don O’Neal.
Lucas Oil Late Model Dirt Series
Race Summary
Thursday, July 19, 2018
Malvern Bank Go 50
I-80 Speedway – Greenwood, Nebr.