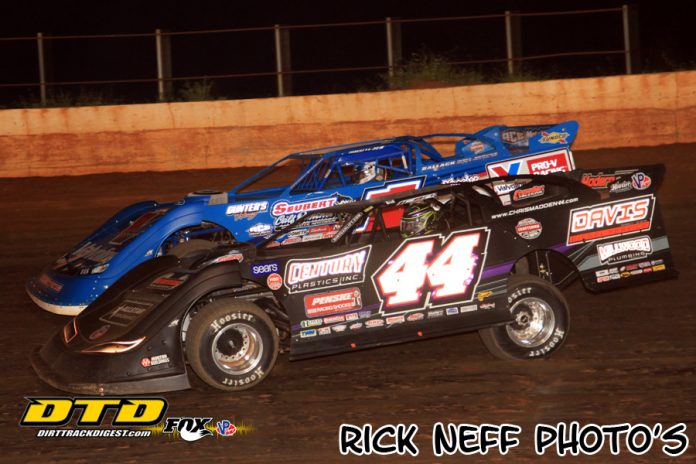 CONCORD, NC – With the World of Outlaws Craftsman Late Model Series making its way through the midwestern United States, the premier drivers in the dirt Late Model world continue one of the closest points battles to date. With two upcoming visits to the state of Iowa, defending Series Champion Brandon Sheppard is hoping that his July 7 victory at Dubuque Speedway — the Series’ only other appearance in the Hawkeye State — will propel the New Berlin, IL standout up the points rung.

Sheppard trails Chris Madden by just 12 points for second in the standings and is 34 back of current points leader Mike Marlar. With two more races in Iowa, Sheppard is hoping that previous success earlier in the month of July will carry over and build some much-needed momentum.

On Tuesday, July 24, the Series returns to the big half-mile of Davenport Speedway in the Quad Cities, IA, located just west of the Iowa/Illinois state line, for the first time in 11 years for a $10,000-to-win payday. Davenport’s own Brian Harris defended his home turf back in 2007 by scoring his lone World of Outlaws victory over Jimmy Mars and another Iowa favorite, Muscatine’s Brian Birkhofer. Three years prior in the Series’ first-ever race there, during the rebirth of the Series, Birkhofer picked up the victory over Dale McDowell and three-time Series Champion Billy Moyer.

Tickets are available online for the biggest race in the Quad Cities area in 2018.

After road trips to Fairbury American Legion Speedway (IL) for the $30,000-to-win Prairie Dirt Classic, followed by the pivotal swing through Wisconsin and dates at Plymouth Dirt Track and Shawano Speedway before wrapping that end of the journey up at Cedar Lake Speedway for the $50,000-to-win USA Nationals, the Outlaws get back to the state where the Wild West Shootout (Take II) began, the Hawkeye State.

The 3/8-mile of Farley Speedway (IA), located west of Dubuque in Farley, IA, will host the World of Outlaws for the first time in 13 years, and only the third time ever, on Monday, August 6th with a $10,000-to-win payday. Farley was one of the original tracks on the schedule the first two years after the 2004 rebirth

“We are looking forward to bringing the World of Outlaw Craftsman Late Model Series stars, along with our local stars, together on the fast 3/8-mile of Farley Speedway,” said Joe Hayes of Farley Speedway Promotions Inc. “Farley Speedway is known for hosting large special events, and this one is quickly becoming one of the most anticipated events of the summer,” he added.

During the last visit, in 2005, Rick Eckert, the last remaining member of the fabled Dirty Dozen who is still full-time with the Series today, went to Victory Lane. In the first-ever World of Outlaws race there in 2004, Scott Bloomquist crossed the checkers first to score the win on his way to the Series Championship that season.

Tickets are still available online for the final event of the Wild West Shootout (Take II).