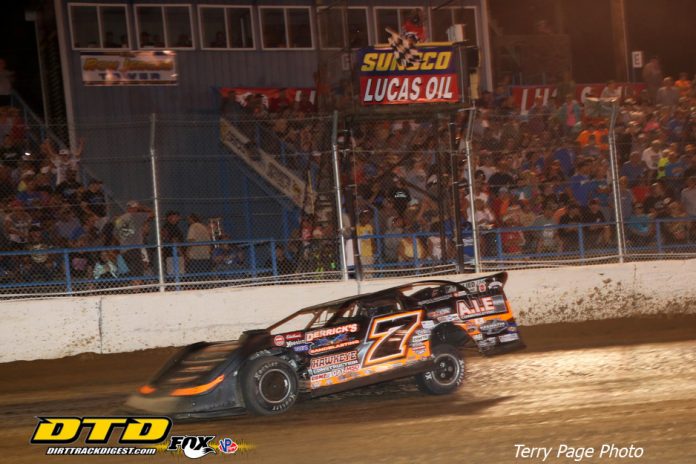 The final caution came out, and with nine laps left on the ensuing restart, Weiss pulled away from O’Neal and McCreadie quickly began gaining ground on the leaders. Weiss managed to hold off McCreadie who went by O’Neal on the final lap to capture the runner-up spot.

The 29-year-old Canadian racer, who finished second last month in the Silver Dollar Nationals at I-80 Speedway, was thrilled to finally get that first big win. “It will take a while to sink in. Thanks to Shawn [Gage] and Cody [Mallory], Scott Bloomquist, and everybody else on this team. It’s finally paid off. We have gotten better and better. I want to thank Vic Hill; this motor ran great. These Sweet-Bloomquist Race Cars; there are none better in my opinion. It’s definitely helped my program.”

Weiss became the fifteenth different winner on the Lucas Oil Late Model Dirt Series in 2018. “Being door-to-door with those guys tonight, like I said it may be a few days for it to sink in. We had a good race there with Earl [Pearson Jr.]. I listened to Scott [Bloomquist] before the race and he told me not to slide the tires. It’s a long race, under the caution I was trying to tell my crew guys that he [Pearson] was getting a flat tire. Then to run door-to-door with Hudson, I know it’s his last-race of the year and he probably wanted to win it more than anyone.”

McCreadie’s bid for back-to-back wins came up short as he congratulated Weiss in victory lane. “It’s good to see the payoff is now up to par with all of the other big races in the country. I just needed a little break at the end. On the restarts I was down on the bottom. The flat tire we had didn’t help. The crew did a great job getting me back out on the track. I said there was no use saving the deck at the end, so I just let it go. We made up a lot of track on those guys. I hope I made a good clean pass on Hudson. Up top you get a 10 mile-an-hour faster run on someone when you go into that corner and you don’t know what’s going to happen.”

O’Neal who won the Ralph Latham Memorial on Wednesday night at Florence ended his season with a third-place finish. “I came here to win tonight. We have had a good car all week. I feel bad for the team. I had a good week. It was a good way to go out this year. Thanks for all of the fans that support me, and I will miss all of you, but we will be back in February.” 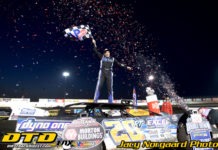