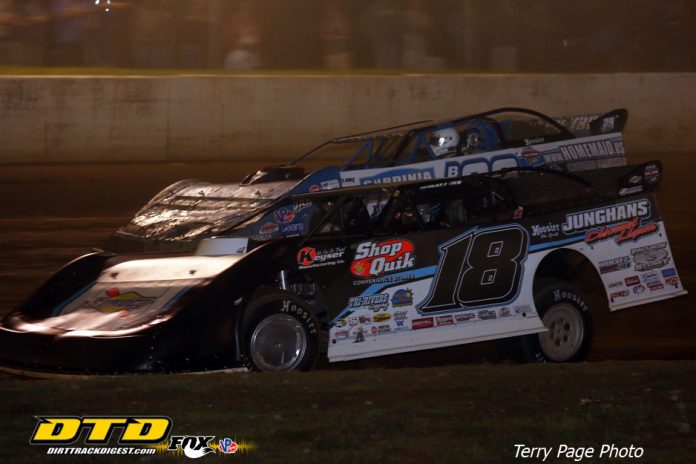 SARVER, PA — Prior to Sunday night’s Outlaw invasion at Eriez Speedway, June 26, 2015 was the ShopQuik No. 18 of Chase Junghans’ last victory with the World of Outlaws Craftsman Late Models.

Junghans’ night was almost perfect across the event board, time trialing second in Flight A and going on to win heat race number 2. He then went on to re-draw the outside pole, alongside track favorite Boom Briggs, take the lead on lap 1 of the feature and never looked back, leading all but just one lap out of the 50 completed.

“I thought that first one was going to be hard to get – we kind of fell into that,” Junghans said. “The second one was way harder, so hopefully we have the monkey off our back and we can start clicking them off.”


A yellow flag with just ten laps remaining re-stacked the field, giving second-place running Brandon Sheppard a few final shots at the lead. But Junghans stuck to his line and prevailed.

“I started hearing someone, but before that caution I saw that blue [no.1] car and I was like ‘[dang!] he’s about to pass me.” Junghans said. “I kind of picked [Sheppard] with some lapped cars and then the caution came out and my guys told me where they thought I should run. So I moved up a little bit on the track and that worked really good.”

Chase went on to say he plans on taking this momentum with him into the World 100 at Eldora in two weeks. One thing that he won’t be taking for sure is his crew member Corey Richman’s quite lengthy locks…

After Lernerville in 2015, Richman vowed not to cut or trim his hair until Chase won with the Outlaws again. Sunday was the end of that streak, and as Series announcer Rick Eshelman brought out the scissors and held them high in Victory Lane, Junghans possessed a look of humor and relief.

Defending Series Champion Brandon Sheppard crossed the stripe in the runner-up spot. Coming all the way from the 16th starting spot and picking up the KSE Hard Charger Award in the process, Sheppard said it was an unsuccessful effort in his preliminary events that may have cost him a win.

“In order to win these races, you’ve got to be able to do good early in the night and start up front,” Sheppard said. “It’s really, really tough to come from the back with all of this competition we’ve got at these races.”

Sheppard did all of his work under the long stretch of 40 green-flag laps, where the field got spread out and lapped traffic began early on. He had a lot of ground to make up, which is why he said he felt his car was used up by the time a yellow came out with ten to go.

Chris Madden rounded out the podium in third, wrapping up yet another top-five finish to get those all-important championship points in which he still leads Mike Marlar and Brandon Sheppard by 30 points. Track conditions were not particularly to his liking, but he was pleased with a podium finish.

“It was very holey, spotty and choppy here and there – just a dirty place,” Madden said. “If we could have drawn the front row, we might have had a chance a winning the thing. But we drew a four and ran third, so we’re happy with it.”

Next stop…
The Series’ next tour stop lies in Dundee, New York, as the Outlaws prepare to debut at the ¼-mile oval during the track’s annual Fall Nationals on September 21. More event information can be found at http://www.outlawspeedwayllc.com/