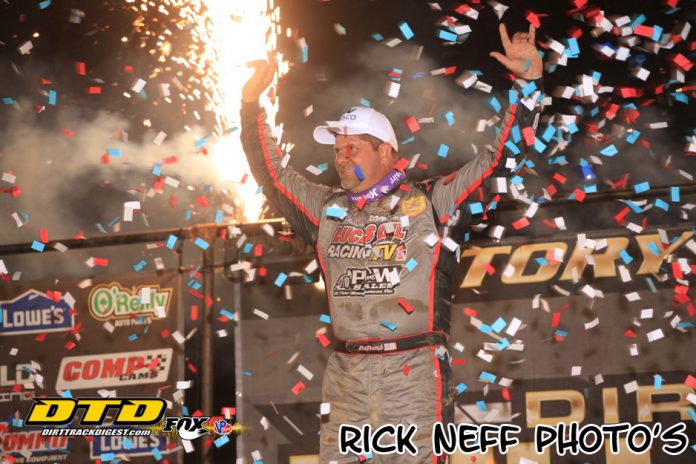 MANSFIELD, OH – Earl Pearson Jr. added the Inaugural Dirt Million at the Mansfield Motor Speedway to his impressive list of career victories. His late-race pass around Bobby Pierce allowed him to take home the $202,993.50 first-place prize.

The crowd erupted as he took the checkered flags ahead of the field. Pearson was the sixth and final leader of the thrilling 100-lap event. The capacity crowd were kept on the edge of their seats throughout the race, right up until the checkers flew.

Pearson started 19th on the grid and pitted twice during the race. The first time was after receiving damage in a multi-car accident early in the race. The 4-time Lucas Oil Late Model Dirt Series National Champion began his surge through the pack late in the race. A caution flag with eleven laps to go helped, eliminating the gap that Pierce had managed to gain over the field.

Pierce started 22nd and charged through the field quickly. He was leading with eleven laps to go when the final caution of the race appeared. Pierce then relinquished the lead to Pearson but mounted several challenges on the leader in the waning laps. He ultimately found himself on the podium one spot short of the pinnacle, finishing in second. Gregg Satterlee also charged from the rear of the field to take third. Ricky Weiss and Scott Bloomquist completed the top five finishers.
“Well, first off I want to thank Bobby Pierce. With this kind of money on the line he could have pulled a slide-job on me, but he raced me clean. He is a class act. He is going to win a lot of money in his career. Thanks to all the fans here. The kind of money that the track put up for this race is amazing, and it’s a great thing for this sport. I can’t say enough about my crew.”
“I got in that wreck down in turn one early on, and I kept coming in and they kept working on the car each time. I knew once I got to the front that their work had paid off. They gave me a shot at the win, and I attribute our success tonight to all of their hard work and not giving up. I would like to thank Ronnie Stuckey, Garrett Alberson, and J.C. Wright, and everybody else on the car that helps.”
The race saw six different leaders attempting to make a career-best payday. Don O’Neal, Ricky Weiss, Shannon Babb. Jimmy Owens, Pierce and Pearson all took turns at the top spot.
“When I restarted on the outside after that final caution I knew my car was pretty good. I got ahead of Ricky [Weiss] and then me and Bobby [Pierce] had a good little race for the lead. I knew he was going to run the top. Once I got in front of him I knew I had to defend the top, because that was the only way I was going to keep him behind me. I can’t believe this. This is just a dream come true. I am proud to see all of these people here,” said the winner in Lucas Oil Victory Lane for the fifth time in 2018.
Pierce also thrilled the crowd once again with his rim-riding exploits and commented in Victory Lane about coming up just short of winning. “That was such a fun race! I can’t thank Cody and Jacob here at Mansfield enough for what they are doing for the sport. It might be unique and different but it is what we need to grow the sport. Thanks to all of these fans for coming out and watching. I didn’t need that last caution, but I also didn’t know how big of a lead I had. My dad was signaling to me and I guess Earl came in and got some tires. It definitely showed at the end because he was pretty good. I was just trying to hang on at the end. My right front tire was kind of giving up on me.”
Last year’s runner-up in the Lucas Oil Rookie of the Year chase, Gregg Satterlee, joined Pearson and Pierce on the podium. “We went a little softer on tires than most anyone in the field. We tried to keep the tires under us for most of the race. We had a really good car. It was really balanced. Earl just snuck by me. Congrats to Earl on the win. Those last 15-20 laps had to be pretty entertaining to watch.”
The winner’s Ronnie and Terri Stuckey-owned Black Diamond Chassis is powered by a Clements Racing Engine and sponsored by: Lucas Oil Products, P&W Sales, Tegeler Wrecker and Crane, Rauen Precision Machining, DriveWFX.com, Midwest Sheet Metal, Sunoco Race Fuels, Papich Constriction, 5-Star Shop service, David Petersen Motorsports, and Cooper’s Country Meat Packers.
Completing the top ten were Brandon Sheppard, Steve Casebolt, Dale McDowell, Darrell Lanigan, and Max Blair.
Lucas Oil Late Model Dirt Series
Race Summary
Saturday, August 24, 2018
Dirt Million
Mansfield Motor Speedway – Mansfield, OhioEibach Springs Heat Race #1 – Finish (8 Laps – Winner Transfers): Tyler Erb, Earl Pearson, Jr., Nick Hoffman, Dan Angelicchio, Chris Simpson, Billy Moyer, Jr., Billy Moyer-DNS, Greg Oakes-DNS, Kyle Moore-DNS