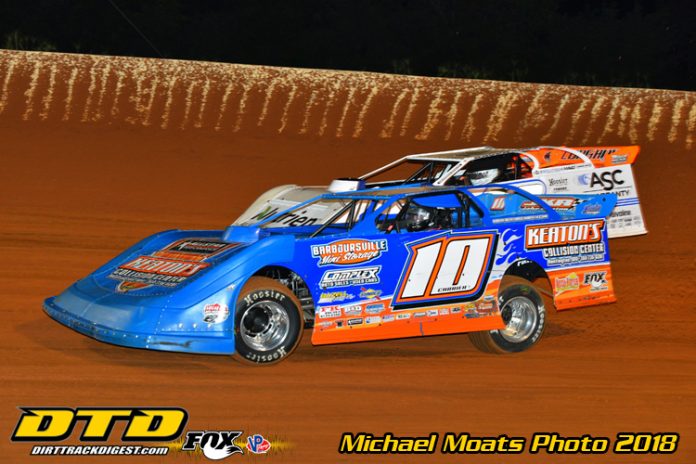 JUNCTION CITY, KY  – Kentucky native Eddie Carrier Jr. took the lead from Earl Pearson Jr. on lap 28 and went on to win the rain-shortened John Bradshaw Memorial at Ponderosa Speedway. The win marks his tenth career Lucas Oil Late Model Dirt Series victory.
Carrier was born and raised just 20 miles from Ponderosa Speedway. His father, Eddie Carrier Sr. won a track championship and a multitude of feature events at the 3/8-mile bullring.
Carrier led the first seven laps of the race until Pearson took over the point. Carrier rallied back, using the outside line to take control again on lap 28. When a caution for debris flew after 30 laps were scored, rain began to fall. After several laps under caution with rain continuing to fall, the race was called official. Trailing Carrier and Pearson across the line were Josh Richards, Jonathan Davenport, and Jared Hawkins.
The 47-year-old Carrier became the seventeenth different winner in LOLMDS competition in 2018. “I don’t think I could have run 20 more laps like that up top. Thank you for the rain. I have a left rear flat, so I am glad it’s over. I have been coming here since I was kid, watching my dad and Russ Petro battle it out every Friday Night. There were a lot of great drivers that ran here like Big Daddy Paul Feistritzer, Finn Watson, and several more. It’s always special to win here.”
“All of my friends and family are here. To come in here and outrun these Lucas Oil guys, I don’t care if I have got 3,000 laps here when these guys come in here they are all business. They know what they are doing and that’s why they get paid to do it. We are a small team. We try to always do the best we can every time out. I think when Earl got on the bottom there it kind of dirtied the top of the track for me. I was going thru a tear-off about every lap.”
Pearson coming off a career-win in the Dirt Million at Mansfield last weekend finished second. “Hey anytime I lose to a guy like Eddie I don’t feel too bad about it. He and I are great friends. Me and Josh [Richards] went with a little bit softer tire. We led it for a while by running the bottom. Eddie was up top where he normally doesn’t run. He made it happen, so I am happy for him. It was a great race track they had here tonight. I hated the rain situation, but you can’t control that.”
Richards also complemented the track crew for a well-prepared surface. “We will take third. I knew on that last restart that the rain was coming. I probably should have taken the top on Eddie. I know Earl and I both gambled on tires tonight. I thought I had a shot before that last caution, I was running Earl and Eddie down. I had a really good car, but Eddie and those guys deserved it. It was good to see him win.”
The winner’s Jake Keaton Racing-owned Longhorn Chassis is powered by a Durham Racing Engine and sponsored by: Keaton’s Collision Center, Barboursville Mini-Storage, Complex Auto Sales Used Cars, All-Star Performance, Fox Racing Shox, and Accu-force.
Completing the top ten were Darrell Lanigan, Jimmy Owens, Gregg Satterlee, Tanner English, and Mason Zeigler.
Lucas Oil Late Model Dirt Series
Race Summary
Friday, August 31, 2018
14th Annual John Bradshaw Memorial
Ponderosa Speedway – Junction City, KY 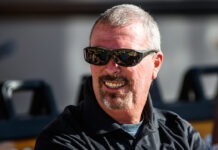